When Soyoung Suh, a scholar of Korean cultural history, arrived at Dartmouth in 2011, she found a real thirst among students, faculty, and members of the Upper Valley community for a deeper understanding of North Korea. 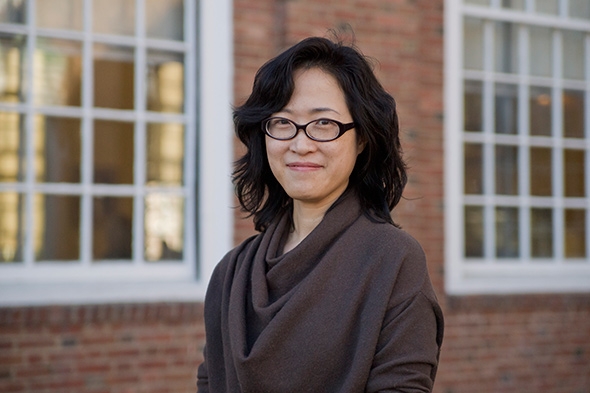 Most Americans view the isolated one-party, family-controlled state as a belligerent enigma, says Suh, an assistant professor of history and of Asian and Middle Eastern Studies. Media coverage of North Korea’s nuclear threats, President Kim Jong-Il’s cult-like leadership, and the transition of power to his son Kim Jong-Un fed curiosity.

In the class she’s currently teaching, “North Korea, Origins and Transitions,” Suh and her students examine current events and ongoing issues such as human rights abuses, famine, and the nuclear crisis. Suh says her goal is to guide students beyond the headlines to a deeper understanding of the origins and currents that came before.

“I want students to examine the history and the complicated picture in East Asia to develop a more mature understanding of how the past has shaped the present problems,” Suh says.

That work begins with an examination of our perceptions of North Korea, she says.

“For example, the first question that comes up about North Korea is when it will collapse. But this has been the question of American observers for more than 20 years. ”We need to examine our own lenses in light of the fact that this country, with all this devastation and famine, has survived and has not met our expectation of collapse.“

Suh takes the class beyond academic reading by engaging with experts, activists, and others who are involved with North Korea. Among the speakers who have visited Suh’s class are Dongwoo Yim, an architect specializing in urban design as it relates to government policy, who spoke about ”North Korea in Transition: Urban Transformation of Pyongyang and its Future.“

On February 24, Consul General of the Republic of Korea Kang-Ho Park traveled to Hanover from Boston to speak about South Korean relations with the North.

And on Thursday, February 27, Stephen Linton, chair of the Eugene Bell Foundation, will speak on ”North Korea: A Case Study on Humanitarian Aid Models.“ The Eugene Bell Foundation is a not-for-profit organization that provides humanitarian aid to North Korea. Linton, who holds a PhD in Korean studies from Columbia University and was formerly visiting associate of the Korea Institute at Harvard University, has been involved in transporting medical supplies to North Korea since 1979. The public event is from 4:15 to 5:45 p.m. in Carson Hall L02.

”I think my course is just a first step to further more refined and mature understanding about North Korea," Suh says.