The Alfred P. Sloan Foundation today announced the selection of Dartmouth’s black hole researcher Ryan Hickox as a recipient of a 2014 Sloan Research Fellowships. He is one of 126 U.S. and Canadian researchers to receive a fellowship this year. 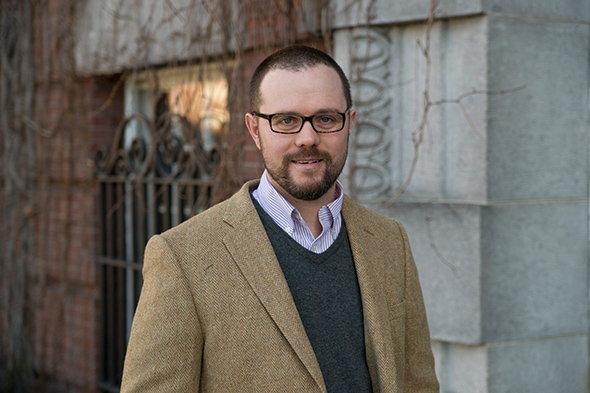 Assistant Professor of Physics and Astronomy Ryan Hickox, a black hole researcher, has been awarded a Sloan Fellowship. (Photo by Eli Burakian ’00)

The fellowships are awarded to early-career scientists and scholars whose achievements identify them as rising stars, who are considered the next generation of scientific leaders.

“For more than half a century, the Sloan Foundation has been proud to honor the best young scientific minds and support them during a crucial phase of their careers, when early funding and recognition can really make a difference,” says Paul L. Joskow, president of the Alfred P. Sloan Foundation.

An assistant professor in the Department of Physics and Astronomy, Hickox is an astrophysicist who searches for hidden deep space quasars to learn more about the supermassive black holes that lie at the heart of every galaxy. Quasars are among the brightest, oldest, most distant, and most powerful objects in the universe.

"Our work explores how the gravitational potential of the dark matter halos that surround galaxies, as well as the energy released by growing supermassive black holes at their centers, can profoundly influence the formation of stars,” Hickox says.

Sloan Research Fellows have gone on to notable careers and include such intellectual luminaries as physicist Richard Feynman and game theorist John Nash. Since the beginning of the program in 1955, 42 fellows have received a Nobel Prize, 16 have won the Fields Medal in mathematics, 13 have won the John Bates Clark Medal in economics, and 63 have received the National Medal of Science.

Nominated by their fellow scientists, fellows are selected on the basis of their independent research accomplishments, creativity, and potential to become leader in their fields. Fellows receive $50,000 to further their research.