The Dartmouth College Glee Club is bringing music “From Spain to the Americas” for its winter concert—and bringing a tenor from New York’s Metropolitan Opera to Dartmouth for the occasion. 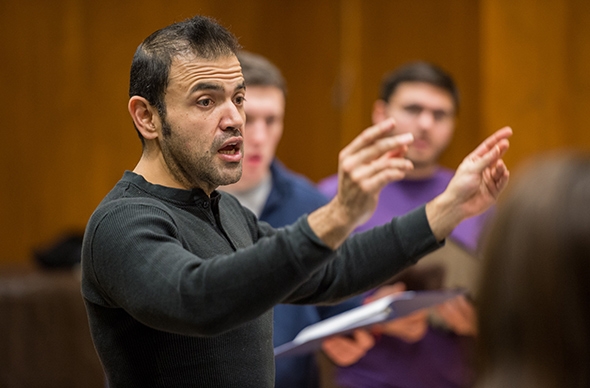 Metropolitan Opera tenor Hugo Vera has been working with the Dartmouth College Glee Club in advance of their winter concert. (Photo by Jacob Kupferman ’14)

Met tenor Hugo Vera has been working in rehearsals with the Glee Club in advance of the performance, which takes place at 8 p.m. on Saturday, February 15, in the Hopkins Center’s Spaulding Auditorium. Vera will conduct and perform in several of the concert pieces.

“Hugo Vera brings a wealth of experience to the Dartmouth students,” says Louis Burkot, director of the Glee Club. “An accomplished tenor in the mold of Placido Domingo, Vera has fantastic ears, and an understanding of the singing of the Spanish language that has been transformational for our students. I think the Dartmouth singers have really enjoyed his youthful energy, his sense of humor, and his high expectations for them.”

Meghan Hassett ’15 took part in a voice lesson with Vera.

“It was fantastic to work with Hugo Vera,” she says. “Not only was it a lot of fun, but he had me do a lot of things with my voice I hadn’t tried before. At the end of the lesson I felt really good about how the music sounded.”

Hassett, who sings with the a cappella group the Decibelles as well as the Glee Club, agrees with Burkot about Vera’s impact on the group. “Hugo Vera has done really cool things with our sound,“ she says.

Full information about the concert program and ticketing is available at the Hopkins Center website.