Summing up three separate Winter Olympic experiences is no easy task, partly because “each Olympics has a different flavor,” says Chip Knight, Dartmouth’s director of skiing and head coach of the women’s alpine team. 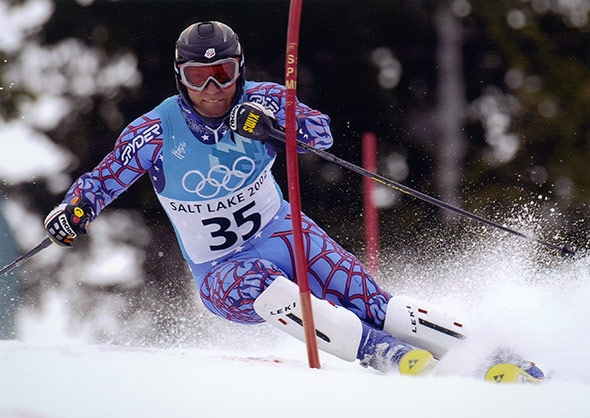 But the former world-class slalom skier, who competed in the Nagano, Salt Lake City, and Torino Games, knows one thing for certain when it comes to the Olympics: “It’s everything the press makes it out to be. It really is a special occasion, and just being able to be there and compete is an achievement.”

A graduate of Williams College, Knight was a 13-year member of the U.S. Ski Team whose best individual career finish was sixth in the 2003 World Cup slalom. He first competed in the Winter Games as a 23-year-old at Nagano in 1998, and skied in his final Olympics at Torino in 2006 at age 31, a team veteran.

“It was a great time in my life and a great career, and it’s a period of my life that I look back upon fondly,” says Knight. “I’m proud of what I was able to achieve and the longevity I had as a ski racer. Three Olympics, that’s a long time. Here at Dartmouth now, I try to instill in my student-athletes the lessons I learned through my career—the value of working hard, and staying focused, and perseverance.”

Here’s a look back at Knight’s three Winter Olympics.

1998 Nagano: “My first Olympics are kind of a blur. I remember it being really neat from a cultural standpoint, being in Japan. But I remember being devastated. I was actually skiing really well going in and I only made it halfway down the course before I fell. You go to the Olympics and you want to compete and post a good result, but coming away from that Olympics I felt like it was such a blur and I hadn’t even made the finish line. The things I remember most is the Olympic village, and that it was one of the first years the pro hockey players were in the Olympics. So I remember seeing Wayne Gretzky. It’s always really neat just to mingle in the village with so many high-caliber athletes from different sports. You don’t get to do that at any other time in your life.”

2002 Salt Lake City: “The games in Salt Lake were probably the highlight of my career because it was the home Olympics and was more or less during the peak of my career. I finished 11th and I was pretty proud of that. It was a good day in really tough conditions. For skiers, it’s just one day, one race, so all these variables have to align to have a really good day. And that day it was raining at 6,000 feet in Park City, which means rutty conditions. That makes it really challenging, but I was fortunate to make it down and post some decent runs and have a solid result. My whole family was there, so it was really, really special. They were able to share the moment and the culmination of so many years of work and dedication. My whole family skis, and we used to drive five hours each way, every weekend, from Connecticut to Stowe, Vermont. I don’t know how my parents did it, but they loved to ski and instilled that in me as well.” 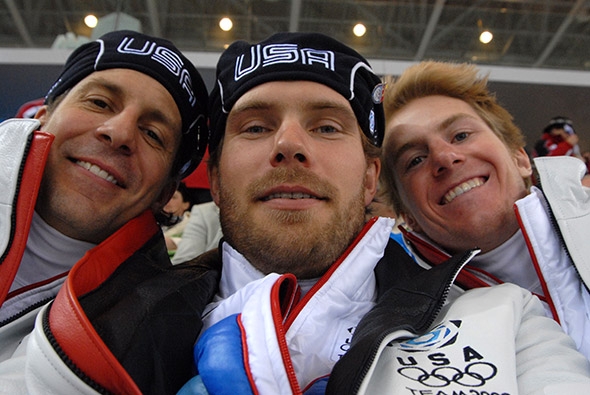 From left, Erik Schlopy, Chip Knight, and Ted Ligety at the opening ceremony for the 2006 Torino Winter Games. Due to the scheduling of the slalom skiing event, which is held near the end of the games, this was the only Olympic opening ceremony in which Knight participated. (Photo courtesy of Chip Knight)

2006 Torino: “The ’06 Olympics were a big personal achievement for me. I was one of the older guys on the Alpine team and I was definitely being pushed out of the team because of my age (the summer prior to the games, the U.S. Ski Team required Knight to pay an $8,000 ‘funding contribution’ to keep his position on the team). So it was a huge achievement, despite having that kind of a culture around me, to be able to still post top-20 World Cup results and qualify for the team, and to still have a respectable performance at the Olympics (he finished 18th).

"I was really proud of the fact that I was able to keep my head in the game and stay focused on my skiing and what I needed to do to compete at the highest level. I think as Americans we focus so much on the medals, it’s the ‘medal count,’ and we want to win more medals than other countries. But there is so much beneath the medals. There’s so much about competition, and perseverance, and hard work that I would argue is equally important. And that year for me was a time when I came to realize what was truly important in sports. It was the end of my career and it was pretty clear that I wasn’t going to win a gold medal or a World Cup race. But I could still compete at a really high level. I could still work hard and take pride in that effort and that dedication to the task.”