A new study by researchers from Dartmouth and two Australian universities provides the first empirical evidence using data from a variety of countries that foreign aid can greatly improve foreign public opinion of donor countries. 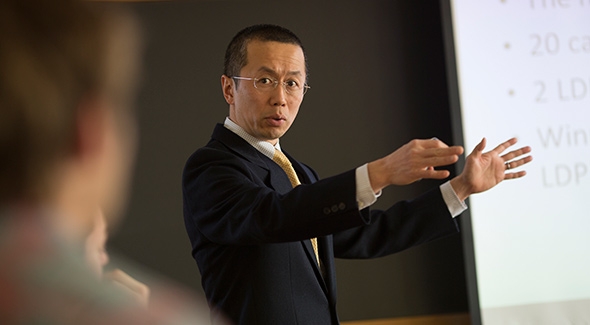 Yusaku Horiuchi, the Mitsui Chair in the Study of Japan, is co-author of a new working paper about the impact of foreign aid on foreign public opinion. (Photo by Rob Strong ’04)

The findings are based on a U.S. foreign aid program targeting HIV and AIDS—the President’s Emergency Plan for AIDS Relief (PEPFAR)—that has substantially improved public perception of the United States in the more than 80 developing countries receiving the aid. But the findings have broader policy implications for an emerging international order in which major powers increasingly use foreign aid rather than militarized conflicts to sway global public opinion and pursue a range of objectives in foreign relations, researchers say.

The working paper, which has been accepted for publication in the Quarterly Journal of Political Science, is available on SSRN (Social Science Research Network). The study included researchers from Dartmouth College, the University of Sydney, and the Australian National University.

“By doing good, a country can do well,” says co-author Yusaku Horiuchi, an associate professor and the Mitsui Chair in the Study of Japan in the Department of Government at Dartmouth. “Our findings suggest that policy debates about foreign aid programs should consider not only their efficacy in achieving direct goals, but also their value in improving the donor country’s global or regional standing.”

The Dartmouth-Australian study takes a new approach to the issue, applying for the first time a comparative, cross-national perspective using data from a variety of countries. The results suggest that in addition to its humanitarian benefits, foreign aid that meets certain criteria—targeted at important needs, sustained over time, perceived as being effective, and highly visible—can serve an important strategic goal for those countries that give it.