Haley Reicher ’17 may look familiar to Upper Valley audiences when she takes the Moore Theater stage in Spring Awakening, the new Dartmouth Department of Theater production that runs from February 21 through March 2. 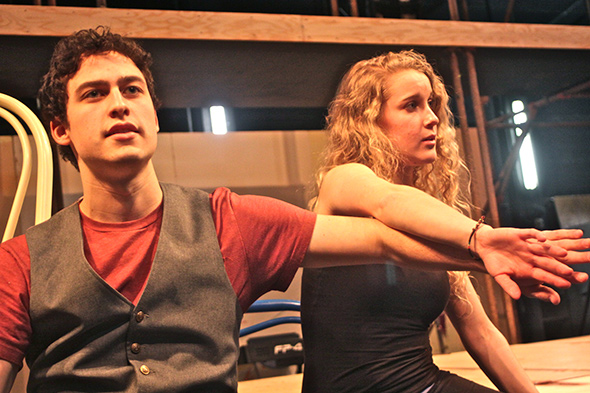 Haley Reicher ’17, who plays Wendla in “Spring Awakening,” in a scene with Max Gottschall ’15 in the role of Melchior. Reicher and a few other cast members will doing pop-up performances of one of the musical’s songs around campus this week. (Photo by Laurie Churba Kohn )

That’s because there’s a good chance they’ve seen her on stage before. She was a lead dancer as an 11-year-old in the annual Christmas Revels show at the Hopkins Center for the Arts, and also performed in Northern Stage productions and with the Barre Players before her family (her father is Dan Reicher ’78) moved from Vermont to the San Francisco area in 2007.

After her role in the theater department production of Big Love this past fall, Reicher returns to the stage as Wendla in this Tony Award-winning rock musical. Based on a controversial 1891 German play of the same name, Spring Awakening is a gripping drama about coming of age, sexual awakening, and how adults can fail their adolescent children.

Associate Professor of Theater Jamie Horton, who is directing Spring Awakening, says he knew early on that he wanted to cast Reicher as the naïve teen who becomes involved with Melchior, played by Max Gottschall ’15.

“Haley has that triple threat of dance, vocal prowess, and acting skill,” says Horton, who also directs Dartmouth’s theater program. “And there’s a sense of vulnerability she has that felt very right for the part. She’s very talented, and this entire cast is very talented. It’s really quite thrilling to watch them come into being in this play.” 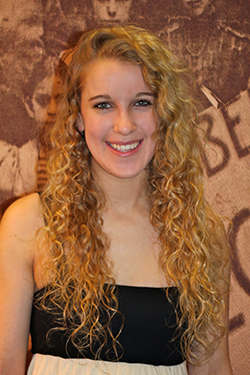 Haley Reicher has been performing in musical theater productions since childhood; as an 11-year-old she appeared in The Christmas Revels at the Hopkins Center for the Arts. (Photo by Laurie Churba Kohn)

Reicher says she is “humbled” to be working with a director like Horton. “The faculty are all so incredibly accomplished here,” she says. The interdisciplinary nature of a Dartmouth education also earns her praise, as Reicher’s other passion is studying the causes, transmission, and solutions for infectious diseases, and at Dartmouth she’s found a way to pursue both art and science.

“The programs in global health really enticed me, as well as having the ability to combine classes so far in geography, anthropology, and sociology to pursue my interest in global health,” says Reicher, who interned for Partners in Health in Boston last summer and is a Dickey Center for International Understanding Great Issues Scholar. “But I also liked the fact that Dartmouth has an amazing theater department that’s small enough so I can participate in productions without necessarily majoring in theater.”

It’s a busy term for Reicher, who is balancing classes and long theater rehearsals while rehearsing and performing with the Sing Dynasty a cappella group and working as a ski instructor for a Dartmouth physical education and recreation class. But she says the hard work has been worth it, and that she and the cast are “all very excited about opening night.

“I feel like I’ve grown a lot in Spring Awakening. It’s a difficult show, but it brings up some pertinent issues for Dartmouth’s community and for college life in general—issues of sexual assault, abuse, and teen suicide. We’ve had discussions about these things as a cast, and I’m really interested in seeing the community’s response to it.”