Russian President Vladimir Putin’s vow to “do whatever it takes” to protect the Sochi Olympic Games is apparently backed up by a formidable array of security measures, but Russia’s track record in dealing with terrorists has not always been inspiring, says Daniel Benjamin, a former top counterterrorism official at the U.S. State Department. 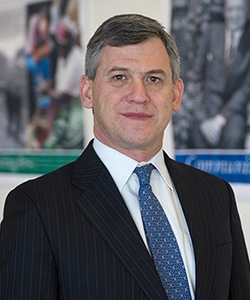 “There is no blinking at the fact that this Olympics has significant security challenges. Extremists, above all from Russia’s north Caucasus, have shown themselves to be determined and capable terrorists,” says Benjamin, the Norman E. McCulloch Jr. Director of Dartmouth’s John Sloan Dickey Center for International Understanding.

The Russian security plan for the Sochi Olympics, dubbed “the ring of steel,” includes deploying 40,000 troops to Olympic venues and villages, stationing anti-aircraft missiles, sending in teams of Cossacks to patrol the streets, and employing an extensive electronic surveillance network.

“The U.S is in a position to offer some help, but complicating matters is a lot of strain in the bilateral relationship, which came to light after the Boston Marathon attack,” Benjamin says.

The U.S. State Department has cautioned American athletes against wearing team gear outside the Olympic compounds and the Pentagon has moved two U.S. warships to the Black Sea as part of “normal military planning,” according to news reports.

As athletes prepare for the opening ceremony, Russian security forces are contending with overt threats from Chechen rebels to attack the games. Despite heightened security in the lead-up to the games, twin suicide bombings in the southern city Volgograd in late December killed 34 people and raised questions about the ability of Russia to assure security.

“Even if nothing happens, there will be a level of tension at the Games that will have an impact on the atmosphere,” Benjamin says.