Gregg: End Run Around Congress Will ‘Come Back to Bite’ Obama

President Obama’s vow in his State of the Union address to bypass Congress through broader use of executive orders is not an unusual tack for a second-term president struggling to move his agenda through a divided legislature, says former U.S. Sen. Judd Gregg, a Dartmouth Distinguished Fellow. 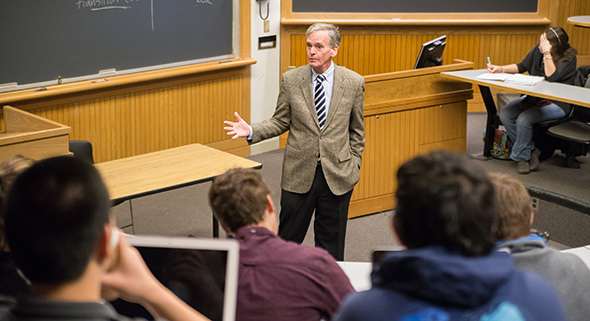 There is only so much a president can accomplish through executive powers, and the loss of goodwill among legislators is likely to “come back and bite him,” says Gregg, who represented New Hampshire for more than 30 years—as a U.S. Senator, governor, and U.S. Congressman, and whose committee assignments included chairman of the powerful Senate Committee on the Budget.

“He has not built good relationships” and is driving his agenda from afar, Gregg says. “The mistake of this administration, in my opinion, is their failure to grasp the bipartisan opportunities that have been there, and they’ve allowed the shouters to take control of the playing field.”

On the state level, Gregg says if he were governor today, he would not support the deal expanding Medicaid that is now being debated in the New Hampshire Legislature. The expansion deal is part of the Affordable Care Act (ACA).

“I strongly opposed Obamacare,” says Gregg, referring to the common shorthand for the ACA. “I think it’s structured intentionally to fail. I believe its purpose is to get us to a single-payer system.”

Gregg was named the inaugural Dartmouth Distinguished Fellow in 2012. During his three-year fellowship, sponsored by the Office of the Provost, Gregg is interacting with students and lecturing and participating in classes. He is also available to advise students working on thesis and independent research projects.