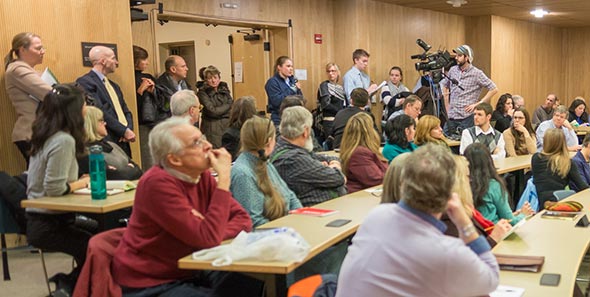 Jocelyn Powelson ’14, offers her perspective on the D-Plan during the first session of the “Moving Dartmouth Forward” community conversations on Monday. (Photo by Eli Burakian ’00)

A standing-room crowd of about 100 people attended the noontime opening meeting on February 3, with more watching through live-streaming video on the Dartmouth YouTube channel. A small group of 12 attended the second evening session, which was facilitated by Associate Professor of Linguistics Christiane Donahue, a member of the D-Plan Study Group and director of the Institute for Writing and Rhetoric.

The series of public sessions sponsored by the Office of the President is designed to give faculty, students, staff, and alumni the opportunity to discuss and contribute to the initiatives President Phil Hanlon ’77 announced during fall term.

At the noon session, Bruce Sacerdote ’90, the Richard S. Braddock 1963 Professor in Economics and chair of the D-Plan Study Group, said the question posed by Hanlon is how do we create continuity for students in their residential experience given the large number of moves necessitated by the D-Plan, and how can the College make better use of facilities given the wide fluctuation in the on-campus population from term to term?

Carey Heckman ’76, adjunct professor of philosophy and a senior lecturer in computer science, said speaking as one who has known the Dartmouth Plan “as long if not longer than anyone in this room, I’ve been a pretty devout hater of it for 42 years.”

Heckman welcomed the open discussion of the issue before offering his criticism of the D-Plan as disruptive of relationships, academic continuity, and efforts to develop community.

Immediately after Heckman’s comments, Jocelyn Powelson ’14, said, “As a student, I think that the D-Plan has probably been the best part of my Dartmouth experience. In my time at Dartmouth, I’ve been able to study and work in five countries on three continents.”

Sacerdote acknowledged the range and depth of opinion the issue attracts.

“This has probably occurred to everyone here, but what Carey and Jocelyn said can both be true simultaneously,” he said.

He stressed that the comments and suggestions from the two D-Plan discussion sessions will be transcribed, and that the committee is still taking comments.

The D-Plan Study Group aims to forward a final report to the President’s Office by the end of winter term.

The second meeting in the series, on February 17, will feature Inge-Lise Ameer, senior associate dean of the College, and Michael Wooten, director of residential education, leading a discussion on enhancing Dartmouth’s housing options.

On March 3, Josh Kim, the newly appointed director of digital learning initiatives, will talk about the creative use of new learning technologies.