Amanda Childress, Sexual Assault Awareness Program coordinator at the College, sees important movement both at Dartmouth and nationally in confronting the shocking frequency of sexual violence on college campuses. 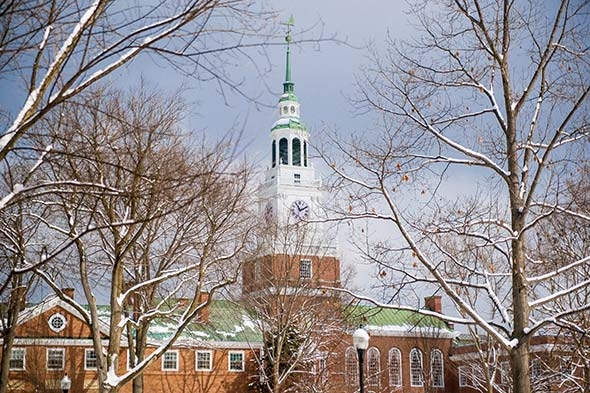 She says president Obama’s decision last month to establish a White House Task Force to Protect Students from Sexual Assault was a direct result of a new report from the White House Council on Women and Girls that found nearly 1 in 5 women, and 1 in 71 men have experienced rape in their lifetimes and that college students are at highest risk of sexual assault. Data also shows that a majority of campus sexual assaults are committed by repeat offenders, she says.

Dartmouth has announced creation of a new center for the prevention of sexual assault and violence at Dartmouth. “All who share our commitment to making this campus safe will have ways to be involved,” says Dean Charlotte Johnson in announcing the Center for Community Action and Prevention. Read more.

“I am really impressed that the president has taken this stand,” she says. “It raises the stakes around issues of accountability for holding perpetrators responsible, and for providing resources for victims and survivors of assault on college campuses.”

At Dartmouth, one of the programs gaining momentum is the Dartmouth Bystander Initiative (DBI), she says. Clinical psychologist Jennifer Messina ’93 consulted with Dartmouth to design a campus-wide community mobilization, which aims to foster a culture of support in which people feel they can take positive steps to help their peers and to defuse threatening situations. DBI will become the flagship program of the new CCAP.

The Greek Leadership Council (GLC) and the Student Assembly have joined the effort, voting to support campus-wide “Overview Talks” to introduce the basic concepts of DBI to all Dartmouth students in the fall. In addition, Athletic Director Harry Sheehy has supported the initiative with the Dartmouth Peak Performance program and requested that all teams partake in a DBI Overview Talk. So far, student athletes from 15 varsity teams and a number of Greek organizations have heard an Overview Talk.

“Our goal is to continue to mobilize Dartmouth students, as well as faculty and staff, and to empower the community with effective tools to respond to the threat of sexual violence,” Childress says.

Other ongoing efforts at Dartmouth include First Responder Trainings and workshops for staff to support survivors of sexual assault, started more than two years ago with Safety and Security officers, deans-on-call, and health services staff. This training is now available to faculty members as well. Childress says a group of professors asked to be included, noting that as faculty and advisers, they want to be able to help support students who may confide in them.

Work on these issues is also being conducted campus-wide by students, faculty, staff and alumni. The Committee on Student Safety and Accountability (COSSA), the faculty Committee on Student Life (COSL) and the Student and Presidential Committee on Sexual Assault (SPCSA), have submitted recommendations for the College, the GLC instituted a Sexual Misconduct Policy that prohibits students found responsible for sexual misconduct from rushing a Greek organization, and a number of Dartmouth alumni have remained active in finding solutions to combat the problem of sexual assault on campus.

“We’ve been looking at a three-pronged approach when addressing the issue of sexual violence on campus,” Childress says. “First, preventing sexual violence from happening in the first place; second, creating a community of support for survivors; and third, holding perpetrators accountable.”

Other Initiatives at Dartmouth

Revised on May 15, 2014.
Written by
Bill Platt
Share this
FacebookTwitterEmail
Articles