From Russia: No Love

Jeff Sharlet traveled to Russia in November 2013, researching the impact of a 2012 law forbidding the distribution of “homosexual propaganda” to minors. He was horrified by what he saw, says the Mellon Assistant Professor of English at Dartmouth. 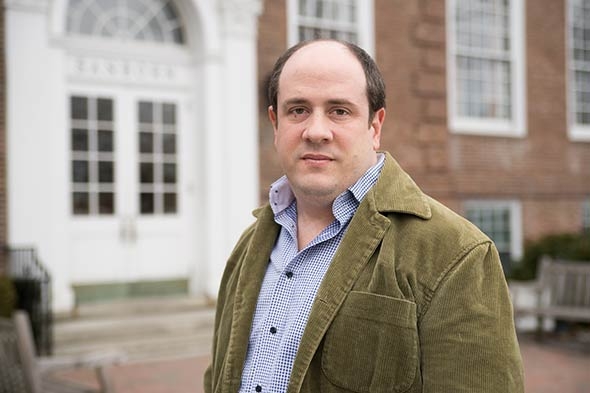 Professor Jeff Sharlet’s article, “Inside the Iron Closet,” appears in the February 2014 issue of GQ. (Photo by Eli Burakian ’00 )

Sharlet calls the LGBTQ crisis in Russia “more severe than any western media I’ve seen suggests.” The law coincides with the arrival in Russia of participants, spectators, and journalists from around the world for the 2014 Olympic Games, which take place February 7 to February 23.

The first report from his investigations, “Inside the Iron Closet,” appears in the February 2014 issue of GQ. Sharlet’s work is supported in part by a fellowship from the Investigative Fund of The Nation Institute.

Sharlet’s previous writing on LGBTQ issues—particularly his coverage of Uganda in his book C Street—garnered the English professor the Outspoken Award from the International Gay and Lesbian Human Rights Commission in 2011.

Dartmouth Now talked recently with Sharlet about what he saw in Russia.

DNow: Did anything feel familiar to what you reported from Uganda?

Sharlet: The Russian government’s application of homophobia is very different than Uganda’s. Although it’s less extreme, it’s in many ways more perverse. Many Ugandan officials want to literally exterminate homosexuality; the Russian policy is that of a very deep and dark closet. There’s violence, but the law is actually about banning love. It says that “gay propaganda” includes any suggestion that a queer relationship is equal to a heterosexual one. And the people who feel its impact the most are queer parents. “A year ago, two years ago,” the director of a network for LGBTQ families told me, “the most popular question was how to come out to the children. Now, one of the most popular questions is how to teach a child to hide.”

Compare that with the openness of the haters: They posed for pictures for me holding up iPad images of their “greatest hits,” pictures of beatings they’d delivered. They had no fear of a police response.

DNow: In December 2013, after your trip, President Obama announced sending a U.S. delegation to the Olympics that includes gay athletes; many Western leaders are staying away from Sochi. Do diplomatic actions like those affect the people you spoke with?

Sharlet: Some would say it helps, a little; some were outraged that the U.S. was going to the Olympics at all; some insisted that freedom for LGBTQ Russians would be won by LGBTQ Russians, fighting in the streets, if necessary; and, sadly, all too many were so terrified, either because they had so much to lose—their children, their jobs, possibly their lives—that they wanted there to be no response at all.

But who knows—maybe one of the deeply closeted queer Russian Olympians currently refusing to talk to any press will come out on the medal podium. A powerful symbolic moment like that might make a difference.

DNow: What happens once the world is no longer watching Sochi?

Sharlet: Most activists—LGBTQ and anti-gay—believe that after Sochi the Russian government will adopt a proposed law that would allow it to take children away from queer parents. Everywhere I went I met people who had been out or semi-out who are now rushing to conceal their identity. I didn’t speak to a single LGBTQ parent who wasn’t looking into emigration—exile, that is. And I should say, most of these were very patriotic Russians. They didn’t want to leave Russia, because it was very important to them that their children grow up Russian.

I attended a meeting of a support group for straight parents and their LGBTQ children. The police raided it. The LGBTQ organization managed to keep them at bay, but had those lawyers not been present we could have all been arrested simply because there was a 17-year-old boy there—a minor—seeking advice from straight mothers on how to speak to his own mom. That kid won’t be going to any more meetings. He likely won’t be coming out at all.