Students Seek Antibodies Among the Alpacas

When you think of lab animals, alpacas don’t usually spring to mind. They tend to conjure up images of socks and sweaters. But chemist and biochemist Mark Spaller and his students have started to focus on this small South American cousin of the camel as an important part of their antibody protein studies. 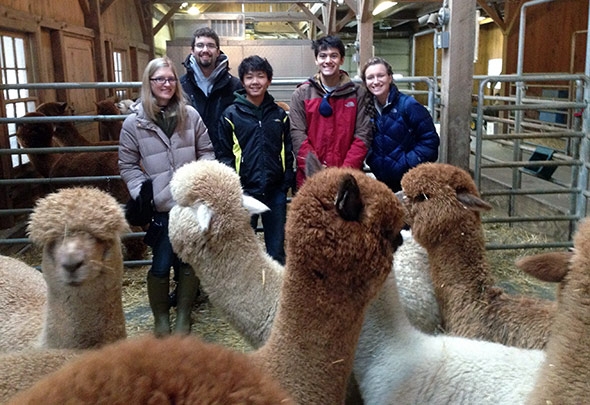 On board for the alpaca study visit were (from the left) Tessa Streeter ’14, graduate student Nicholas Warren, Yu (Bill) Tang ’17, Taylor Watson ’16, and Gabriella (Bria) Grangard ’16. (Photo by Mark Spaller)

“Our recent visit to the Cas-Cad-Nac alpaca farm showcases how our labs can support serious undergraduate research, and on a larger scale than many labs typically do,” says Spaller.

The purpose of their trip to the Perkinsville, Vt., farm was to collect blood samples from the animals, whose immune systems possess a unique type of antibody. Known as nanobodies, these small stripped-down molecules could reach their targets more efficiently and act with higher potency than ordinary antibodies.

“In brief, the objective is to isolate the antibody genes from these alpacas and use them to discover potential diagnostic and therapeutic agents for use against cancer and other diseases,” says Spaller. “There is increasing interest in the biomedical research community and pharmaceutical companies for these types of antibodies.” 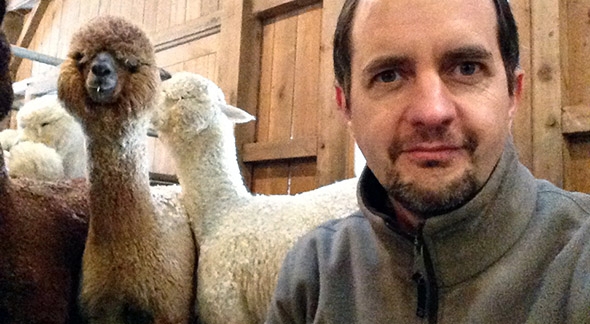 Spaller, an associate professor of pharmacology and toxicology at the Geisel School of Medicine at Dartmouth and a faculty member at the Norris Cotton Cancer Center, is passionate about undergraduate involvement in research. There are currently 11 undergraduates working in his lab, including volunteers and those affiliated with Dartmouth programs such as the Women in Science Project (WISP), Sophomore Science Scholars, and Presidential Scholars.

“What’s notable about Emma and Kathy is that they are both only freshmen, with no prior research experience, and were immersed almost immediately in performing high-level types of experiments that graduate students would typically learn,” says Spaller.

“From the feedback I’d say all who participated in the alpaca experience thoroughly enjoyed the visit. It was definitely outside of the realm of their ordinary experience,” he says.