At 5 foot 4, Lindsay Holdcroft ’14 is one of the smallest starting goaltenders in Division I women’s college ice hockey. As such, the Pittsburgh, Penn., native has always focused on “playing bigger than I am.” Apparently she’s succeeded, because Holdcroft is just the fifth goalie in the history of Dartmouth women’s hockey to register 50 wins, and she ranks second in career saves with 2,421. 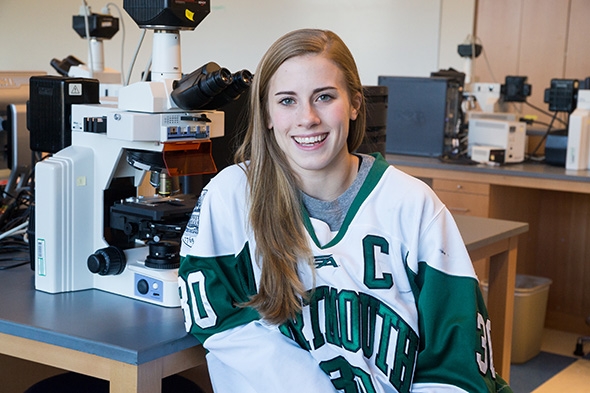 On February 21 and 22, she anchored the Big Green to two crucial wins against Brown and Yale, helping Dartmouth secure its fifth straight ECAC Hockey Tournament appearance. The Big Green face top-seeded Clarkson in the tournament’s opening round on Friday, February 28, in Potsdam, N.Y. The winner of this best-of-three game weekend series will then advance to the semifinal.

Mark Hudak, who registered his 205th career head coaching victory in the team’s 2-1 win over Yale, describes the Big Green’s co-captain as “the hardest working kid on the team, and incredibly competitive. She’s had a couple of games this year where she really kept us in the game with some incredible saves. Against Brown and Yale, where we needed to win these games to get into the playoffs, she faced 42 or 43 shots and only gave up one goal, which is an awesome save percentage.”

Holdcroft ranks fourth among Dartmouth goaltenders, with a .911 save percentage, and she also ranks first in minutes played with 6284:27.

Holdcroft says she felt well prepared for the demands of college hockey after playing varsity high school boys’ hockey. “Playing with the boys, they’ve got the hard shots; they skate fast, and move the puck well, so that made the transition much easier.” 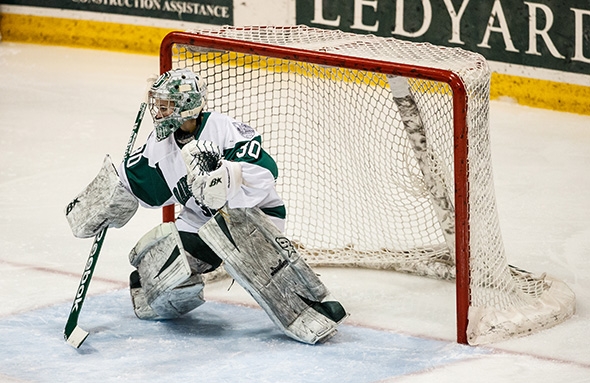 Lindsay Holdcroft ’14 is the fifth goaltender in Dartmouth women’s hockey history to register 50 wins and she ranks second in career saves with 2,421. (Photo by Doug Austin)

A biology and psychology double major, she plans to go abroad after graduation to work in a clinic or to teach before applying to medical school. During an off-term last spring, she interned at a Johns Hopkins University-affiliated adult psychiatric rehabilitation program, and the clinical work she performed there sparked an interest in mental health.

As her college hockey career winds down, Holdcroft says, “It’s been a pretty amazing four years at Dartmouth. The coaches really work on developing us as players and leaders, as well as being good teammates, and the faculty has been wonderful. And DP2 (Dartmouth Peak Performance) and the academic and athletic support they provide to student-athletes have been really incredible. I’m definitely sad to see it end.”

But in the meantime, she and the team have at least two more games to play. “We’re a young team, but we’ve really stepped it up and matured a lot,” says Holdcroft, who co-captains the team with Ali Winkel ’14.

“You always want to peak at the end of your season going into the playoffs, and I think our team’s definitely done that. Clarkson will be a tough opponent for sure, but we’re not just happy to have made the playoffs. We’re going in to win this weekend.”