The Dartmouth community is invited to gather for a celebration of the life of Blaine Steinberg ’15 on Thursday, April 3, at 7 p.m. in Rollins Chapel. Steinberg fell ill and died of a heart attack on March 7 at Dartmouth-Hitchcock Medical Center. She was 20 years old. 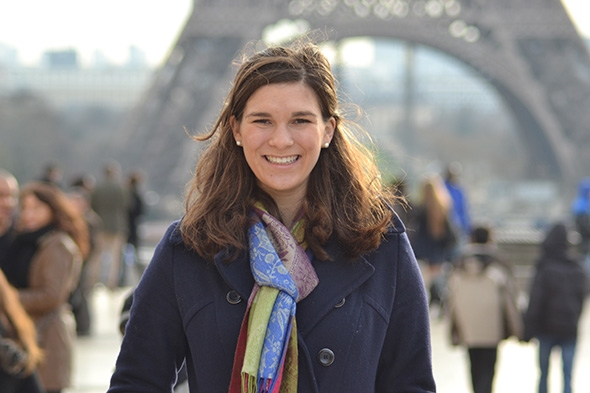 Blaine Steinberg ’15, who died March 7, will be celebrated by Dartmouth friends and family on April 3. (Photo courtesy of the Steinberg family.)

President Phil Hanlon ’77 will speak at the gathering, as will several of Steinberg’s Dartmouth friends. Blaine’s parents, Jill and Sid Steinberg, and her sister, Leigh, who is a member of Dartmouth’s incoming Class of 2018, will attend. Afterward, a candle lighting ceremony will be held on the Green followed by an informal gathering in Collis Common Ground, at which Dean of the College Charlotte Johnson and a number of students and staff will share memories of Blaine.

A Facebook page called “A Book for Blaine” was created in her memory, and friends and family members have been posting photographs, videos, and reminiscences. A childhood friend described her “contagious smile, laugh, and positive energy,” and one of her oldest friends, Carrie Wolf ’15, posted a video of Steinberg performing an inspired rendition of Tom Cruise’s Risky Business dance.

In a March 13 post, her family wrote, “We are overwhelmed by the outpouring of love for Blaine and the support for our family. Every story, every hug and every prayer has provided a small bit of comfort. Most importantly, you have made us smile and laugh in this time of sadness. The way that Blaine touched lives has, if possible, made us even more proud of her.”

Steinberg was a history major who planned to complete a minor in sociology. A member of Kappa Kappa Gamma sorority, she was also a member of the Dartmouth women’s lacrosse team as a first-year student until her career was cut short by injury. She pursued her passion for sports and broadcasting by interning with ESPN last fall and serving as an athletic fundraising intern with Dartmouth’s Department of Athletics and Recreation.

She also served as sports director for Dartmouth Broadcasting, where she hosted a weekly 30-minute sports talk show, The Big Green Scene, provided color commentary for baseball and women’s soccer, and helped produce radio broadcasts of men’s and women’s hockey games. One of the highlights of her Dartmouth broadcasting career was interviewing legendary soccer star and two-time Olympic gold medalist Julie Foudy, who was at Dartmouth for a celebration of the 40th anniversary of Title IX.

Services were held for Steinberg on March 10 at Main Line Reform Temple-Beth Elohim in her hometown of Wynnewood, Pa. More than 1,500 people paid their respects, including three busloads from her alma mater, the William Penn Charter School.