The Dartmouth community mourns the passing of Blaine Steinberg, a member of the Class of 2015, who will be remembered for the passion she brought to sports reporting. She died Friday, March 7.

“We have been in touch with Blaine’s family and shared our deepest condolences with them at this very difficult time,” President Hanlon wrote in the email notification. “Our thoughts are with Blaine’s family, friends, and the entire Dartmouth community at this time of such tragic loss.”

Steinberg’s cause of death is not yet known. College health officials say there is no apparent evidence of infectious illness. Steinberg fell ill and passed away suddenly Friday evening at Dartmouth-Hitchcock Medical Center. 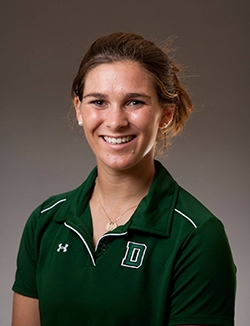 Blaine Steinberg ’15 was a member of the women’s lacrosse team in her first year at Dartmouth. (Photo by Mark Washburn)

Blaine Steinberg was a member of the women’s lacrosse team in her first year at Dartmouth.

Steinberg’s parents, Sid and Jill Steinberg, have asked Dartmouth students to do their best to focus on final exams this next week and to get home safely to see their families. They asked that any memorial celebration for Blaine be held during spring term. The family will hold a funeral on Monday.

Steinberg’s death was noted on campus this weekend, as the annual Dartmouth Idol competition was momentarily halted on Friday night as Idol Director Walt Cunningham announced the sad news and asked the approximately 1,000 people in attendance to pause for a moment of silence. On Saturday the Dartmouth flag flew at half mast, as it also will on Sunday.

Counseling was made available for students Friday night and on Saturday. On Sunday, counselors will be available from 12 noon to 2 p.m., at Dick’s House, and then from 2 to 4 p.m., in the lounge of Woodward Hall. In addition, students, faculty, and staff are urged to speak to a counselor or dean on their own behalf or out of concern for someone else by going to Dick’s House or contacting Safety and Security at (603) 646-4000 at any hour.

“Please do not hesitate to seek help during this time of grief,” Hanlon wrote in his email.

Steinberg came to Dartmouth from Wynnewood, Penn. As a first-year student, she was a member of the women’s lacrosse team, but did not play that year due to injury.

In high school, at Penn Charter in Philadelphia, Steinberg was a two-time team captain in lacrosse and for one year in soccer. She also earned a number of honors, including U.S. Lacrosse Academic All-American honors in 2010 and 2011.

In her biography on the Dartmouth Athletics website, Steinberg said she wanted to be a sports reporter, a dream she realized at Dartmouth. In her sophomore year, Steinberg turned her attention to the student radio group Big Green Scene, and was a broadcaster at soccer and baseball games. She was set to work with baseball again this spring.

“During her time with the women’s lacrosse team, as an athletic fundraising intern and talking Dartmouth athletics as part of the Big Green Scene, Blaine always displayed an engaging personality and a wonderful passion for sports. We extend our deepest condolences to her family and friends in this tragic hour,” said Sheehy.

Last year Steinberg interviewed legendary soccer star and Olympic gold medalist Julie Foudy, who was at Dartmouth for a celebration of the 40th anniversary of Title IX.

Recounting the interview, Steinberg told the website Ultimate Lacrosse: “I had the honor of interviewing one of my idols. … I was pretty much flipping out when I heard that I would be the staff member of the sports radio station to conduct the interview.”