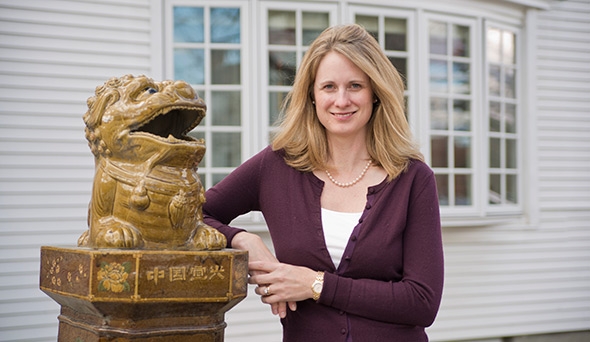 In Boston, Associate Professor of Government Jennifer Lind will talk about the impact of Robert Kennedy’s trip to Japan in 1962. (Photo by Eli Burakian ’00)

“It’s going to be a conversation,” Lind says. “We’ll be talking about the background of U.S.-Japan relations and about what was transformative under the years of John F. Kennedy and Robert Kennedy.” (Watch a video from the event.)

In 1962, to prepare for a diplomatic trip he planned to take in 1964, President Kennedy asked his brother Robert Kennedy to travel to Japan. A critical alliance with the country was in trouble, and Kennedy hoped that the first-ever state visit by a U.S. president to Japan would help heal a growing diplomatic rift, says Lind, whose academic work encompasses international relations and East Asian international security.

In Boston, Townsend, Robert and Ethel Kennedy’s eldest daughter, will discuss her parents’ historic visit to Japan with Lind and Iriye, professor emeritus from Harvard’s Reischauer Institute of Japanese Studies. The event is sponsored by the library and the Consulate-General of Japan in Boston, and runs from 5 to 6:30 p.m. at the library, located on Boston’s Columbia Point. The discussion will also be webcast through the JFK library website.

Lind has researched Robert and Ethel Kennedy’s 1962 visit and writes in the July/August 2013 edition of The National Interest that RFK pioneered a new approach to foreign relations based on direct contact with the populace rather than state dinners and diplomatic photo ops.

“He said, ‘I want to meet the people.’ So he went to schools, he went to farms, he went to factories, he went to judo demonstrations, he went to Catholic Mass while he was there. So he set a very different tone then what was the norm at the time. For Japan, it was really a shining Camelot moment that was very transformative,” says Lind.

A pivotal moment on the trip was the Kennedys’ visit to Waseda University. A number of radical students began heckling Kennedy, until RFK invited one on stage and held the microphone while the student criticized U.S. involvement in Vietnam and the Bay of Pigs. After the student finished, Kennedy began to make a polite reply when someone cut the mic and pandemonium ensued, Lind says.

Kennedy continued respectfully and calmed the crowd through a bull horn. All the while, the event was broadcast live across Japan, and the day ended with Ethel and Bobby Kennedy joining the students of Waseda in singing the school song. In fact, they continued to sing that song on and off during the rest of the visit, and it became something of a Kennedy family drinking song, Lind says.

John Kennedy’s plans to visit Japan ended with his assassination, but Robert Kennedy’s trip marks a critical moment in U.S. Japan relations, Lind says. Her study of the diplomatic visit unearthed a piece of history that was not widely known. In fact, Lind was part of the team that briefed Caroline Kennedy when President Obama appointed her ambassador to Japan, and even JFK’s daughter did not know about the impact of RFK’s visit and the Waseda event, Lind says.