Digital Domains: A Conference on the New Archaeology

Dartmouth’s premier electronic archaeologist and Neukom Fellow Jason Herrmann recently assembled about 30 like-minded scientists for a conference dubbed Digital Domains. They engaged an audience of nearly 80 colleagues, students, and other attendees, discussing and debating the application of remote sensing technologies to past human landscapes. This includes new and developing data collection approaches such as close-range photogrammetry (making measurements from photographs), LiDAR (measuring distance by laser-illuminating a target and analyzing the reflected light), and the use of unmanned aerial vehicles or drones. 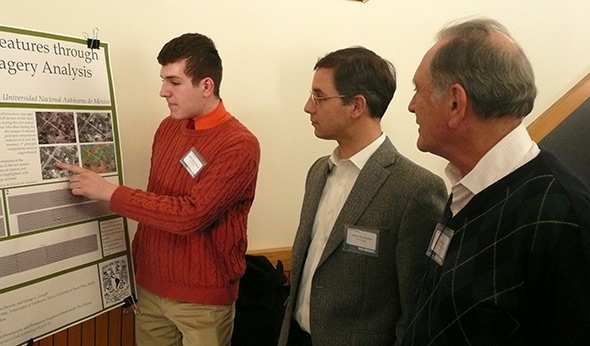 “The proliferation of digital mapping techniques has not only transformed the way archaeology is conducted in both the field and laboratory, but it has caused a fundamental shift in the types of research questions being asked,” says Herrmann.

The international scholars spoke of the various remote sensing methods employed in investigating archaeological landscapes ranging in scale from a single archaeological site to an entire ecosystem or culture area.

Following are a few examples from the digital diggers.

One of the highlights of the conference was a poster session at the Nelson A. Rockefeller Center for Public Policy and the Social Sciences, featuring the work of both faculty and student researchers.

Digital Domains was funded by the Neukom Institute for Computational Science with support from the Department of Anthropology.