Imani Winds Quintet in Residence at the Hop

The New York-based quintet Imani Winds will be in residence at the Hopkins Center for the Arts from March 31 through April 5.

The Grammy-nominated group, which The Boston Globe as described as “the leading wind quintet in America,” will perform an evening concert on Thursday, April 3, featuring the world premiere of Sextet for Winds and Piano, a Hop co-commissioned work by MacArthur “genius grant” jazz pianist and composer Jason Moran. 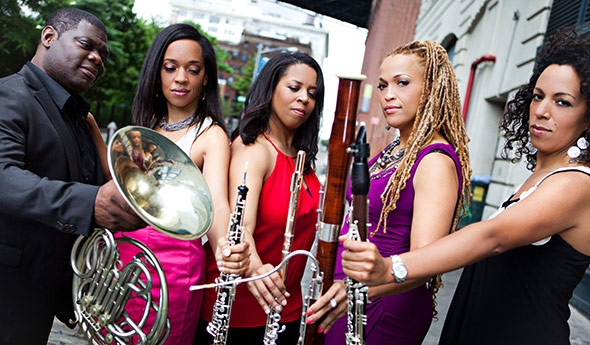 Imani Winds will perform April 3 at the Hopkins Center for the Arts. (Photo by Matthew Murphy)

The group will give a free demonstration, “The Art of the Spiritual,” exploring the history of African-American spirituals and their effect on other musical genres, including original compositions by Imani members. The demonstration will take place at 5 p.m. Tuesday, April 1, in the Faculty Lounge of the Hop.

In addition, the group will engage with students in a variety of ways throughout the week, including visiting classes, coaching and playing side-by-side with the Dartmouth College Wind Ensemble, and performing with student chamber groups in an informal “after-hours” event in the Collis Center.

Since its founding in 1997, Imani Winds has established itself as one of the most successful chamber music ensembles in the United States. The musicians are known for the diversity of their repertoire, which runs the gamut from Romantic period chamber pieces to atonal 20th-century music, tango, and jazz.