Michael Blum ’15 was raised in a musical household in Great Neck, N.Y. When he was 9, he learned to play the guitar from his father, Len Blum, a classical guitarist. But it wasn’t until he got to Dartmouth that he realized music could be more than a hobby. 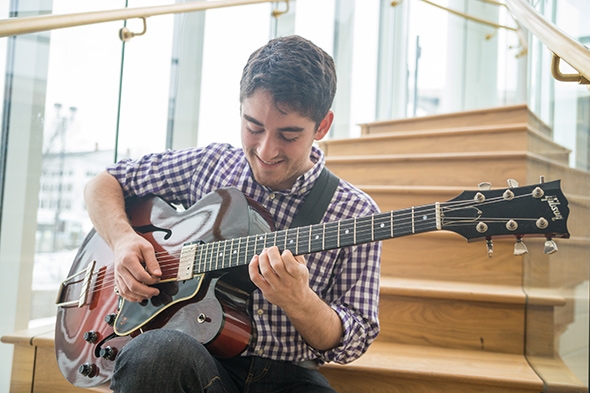 His epiphany took place midway through his first year at Dartmouth, when he played guitar in the orchestra pit for Hairspray, the Department of Theater’s winter 2012 production. The show’s musical director, Joel Mercier, then hired Blum to play in the orchestra pit that summer for the New London (N.H.) Barn Playhouse.

“That was where I decided that music was my calling,” says Blum, a music and cognitive science double major who also sings with the co-ed a cappella group the Dartmouth Dodecaphonics. “Before that first professional gig, I never realized that it was something I could pursue professionally and something that I could really go for.”

Since then, he’s been going all out. He practices seven to eight hours a day in the Hopkins Center for the Arts’ practice rooms, played in the orchestra pit for the recent theater department production of Spring Awakening, and just released his debut CD, Initiation, with the Michael Blum Quartet. One of the quartet members is his guitar instructor, Berklee College of Music Professor Jim Stinnett.

Initiation includes jazz standards and compositions by Stinnett as well the song Six Weeks, which Blum wrote with guidance from Assistant Professor Spencer Topel in a Dartmouth Department of Music independent study class.

“Initiation is really intended to be ‘people music’—music for people’s enjoyment,” says Blum, whose influences include Grant Green, Hank Mobley, and Red Garland. “The music is really not avant-garde or highly intellectual, and it’s also not too commercial, either. But it’s all rooted in the jazz tradition and language.”

Robert Duff, a lecturer in the music department, got to know Blum while Blum served as a teaching assistant for Duff’s class “Introduction to Music Theory.” Duff praises the student’s “sensitivity to melodic line, his understanding of a phrase, and his innate musicality.

“It’s extraordinary that an undergraduate has produced a professionally recorded CD of this quality. It’s rare that this happens at Dartmouth or any institution,” says Duff, who also directs the Handel Society of Dartmouth College. “Michael is a consummate musician at heart, and this CD should serve him well.”