Earth scientists from Dartmouth have been working in the southern tropics, but not among the palm trees and sand. Rather, they spent their time studying a South American mountain glacier, where Assistant Professor Meredith Kelly and PhD candidate Justin Stroup produced two significant breakthroughs. 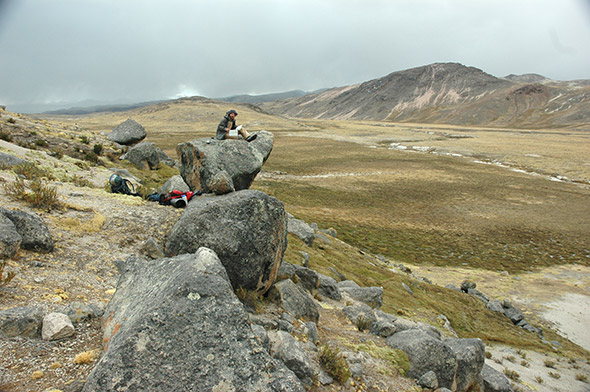 Writing up his field notes, Dartmouth’s Justin Stroup sits on a boulder overlooking a plain that was once covered by the Qori Kalis glacier. (Photo by Meredith Kelly)

Their results provide strong evidence for temperature as a driving force of glacial expansion and retreat over the last millennium, a finding widely reported by The New York Times, Bloomberg Businessweek, and other media.

“Our results are important, since there has been ongoing debate about the causes of recent tropical glacial recession,” says Kelly.

In addition, they found that glaciers globally have undergone changes in a synchronized fashion during the last millennium. “During the period known as the Little Ice Age (1300-1850 A.D.), glaciers worldwide all seem to have grown concurrently in response to this climatic cooling,” says Stroup. This global effect may have been due to volcanic eruptions that added sulfur dioxide to the atmosphere or reductions in solar output or a combination of the two.

The discoveries by Stroup, Kelly, and their colleagues help foster a deeper understanding of natural processes of climate change in the past and perhaps in the future. “What we have now are ideas, hypotheses for climate mechanisms that we can then test with climate models,” says Kelly. Scientists use these models to interpret the past and to make predictions about future climate change. 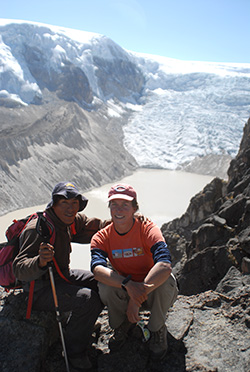 Dartmouth glacial geomophologist Meredith Kelly and Elias Crispin, a local horseman who assisted the researchers on the trek to the study area. The Qori Kalis glacier is in the background. (Photo by Justin Stroup)

The team conducted a study on the Qori Kalis glacier, an outlet of the Quelccaya Ice Cap, the largest ice mass in the tropics. Their findings were reported online in the journal Geology on February 25, 2014.

An important aspect of the field study was defining the timing of the to-and-fro movements of the Qori Kalis glacier. Stroup, who is first author on the paper, and Kelly approached this by using radioisotopes to date its moraines—the mounds of debris left at its most advanced positions as the glacier recedes.

Ohio State University paleoclimatologist Lonnie Thompson’s recent dating of ice cores from Quelccaya complements the work of Stroup and Kelly. Comparison and correlation of the two data sets enabled a detailed analysis of climatological factors registered by Quelccaya cores and past ice extents, supporting the argument that temperature was a strong driver of past glacial expansion and retreat.