The National Security Agency’s large-scale surveillance of American citizens has raised serious issues in the United States and abroad. Against this backdrop, Dartmouth’s Institute for Security, Technology, and Society (ISTS) has organized a Spring Speaker Series, “Surveillance in the Age of Big Data,” featuring four leading authorities in this area. 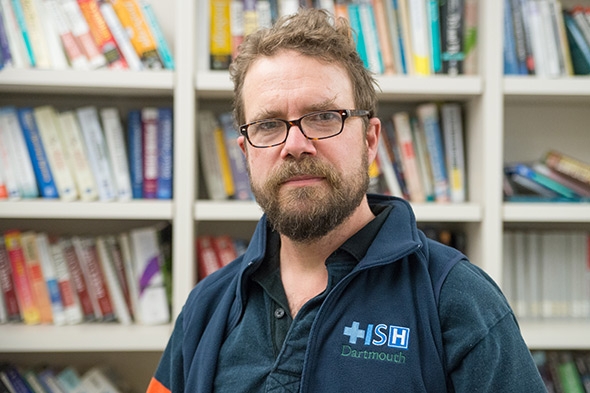 Professor Sean Smith, director of the Institute for Security, Technology, and Society, has organized the ISTS Spring Speaker Series, “Surveillance in the Age of Big Data.” (Photo by Eli Burakian ’00)

“The advent of the age of big data creates the potential for significant privacy risks to ordinary citizens. These issues at the forefront of security, technology, and society are things that concern all members of the Dartmouth community,” says Professor Sean Smith, director of the ISTS.

The first offering in the series will take place April 2, featuring Edward Felten, director of the Center for Information Technology Policy at Princeton University. He will speak on the topic “Technical Tradeoffs in NSA’s Mass Phone Call Data Program.” Felten will talk about the effectiveness of such a program in identifying potential terrorists or clearing up false suspicion, and whether the program can be redesigned to better protect personal privacy, without losing effectiveness.

On May 7, the speaker will be Daniel Weitzner, director of the Computer Science and Artificial Intelligence Laboratory Decentralized Information Group at the Massachusetts Institute of Technology. His talk is titled “Privacy Policy Implications of ‘Big Data’ Surveillance.”

John DeLong, Director of Compliance at the National Security Agency, will give the third talk in the series on May 14, “National Security Implications of ”Big Data“ Surveillance.” DeLong previously served as the deputy director of the NSA Commercial Solutions Center.

The final speaker in the series will be Radu Sion, associate professor of computer science, Stony Brook University (on leave) and CEO of Private Machines Inc. He will speak on the topic “Computation Privacy and Regulatory Compliance Mechanisms for the Cloud.”

All presentations in the series will begin at 4:15 p.m. in Steele 006. Cosponsors of the series include the Computer Science Colloquium and the John Sloan Dickey Center for International Understanding.

Description
Math and computer science professor Dan Rockmore reviews Philip Ording’s 99 Variations on a Proof, which surveys different styles that can be used to prove a single theorem.
Logo
Image