After a flawless performance of Defying Gravity, from the famed musical Wicked, Phoebe Bodurtha ’15 was crowned this year’s Dartmouth Idol winner.

The Dartmouth Idol finalists congratulate Phoebe Bodurtha ’15, the winner of the competition. 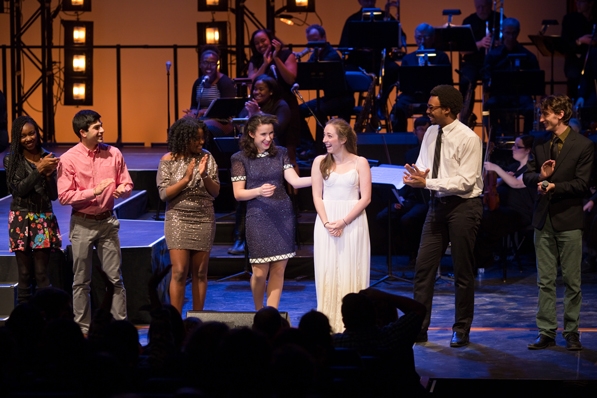 “Going into the finals I did not expect to win at all. I was more grateful that I got to perform in the finals again because it was such a great opportunity,” says Bodurtha.  “I was so taken aback when they said my name. It was a great feeling and I am so glad that I won, because I felt confident and proud of my final performance.”

As the Dartmouth Idol winner, Bodurtha receives a $500 prize and will have the chance to record a two-song demo. Winners of the annual competition have gone on to sing with artists such as Sugarland and to participate in the NBC television series The Sing Off.

Nikhil Arora ’16 won second place, with a prize of $250, and Jamilah Mena ’14 won third place, earning $100. Finalists were judged on vocal performance, musicality, and stage presence, and the winner was decided by an audience vote.

During the show, a video of President Phil Hanlon ’77 and his wife, Gail Gentes, and a cadre of fellow performers—current students, alumni, staff, and community members—surprised the sold-out crowd at Spaulding Auditorium. First was a rendition of We Are the World, featuring a number of singers, including Dean of the College Charlotte Johnson playing Tina Turner and Dartmouth Gospel Choir Artistic Director Walt Cunningham playing Quincy Jones. This part of the video was followed by a duet of Sonny and Cher (President Hanlon and Gentes) singing I Got You Babe.

A native of Stamford, Conn., the newly crowned Idol winner is an Arabic major and a member of the Dartmouth Dodecaphonics, a co-ed a cappella group on campus.

“Music has heavily influenced my time here at Dartmouth. I have formed very meaningful friendships through my a cappella group, and also have learned so much musically from my peers,” says Bodurtha. In addition to singing, she has been an Arabic drill instructor, a member of Fusion Dance Ensemble, and has done research in the government department.

“I have no idea whether I want to pursue music in the future, but I do know that singing is something I am very passionate about. I’m really thankful to Dartmouth for these kinds of arts initiatives and for giving its students the chance to work with such incredible mentors. It makes a huge difference for those of us who love performing, and want to continue to grow and improve.”