Student musicians from the Dartmouth College Wind Ensemble (DCWE) are set to combine performance, learning, and service during spring break. The 33 musicians, accompanied by DCWE Director Matthew Marsit and several community musicians, will be in Costa Rica March 15-24. Partnering with the National Institute for Music of Costa Rica, the students will give six concerts, including a performance at the home of the U.S. ambassador, and also volunteer their time to work with students in music programs in financially deprived regions. “This tour is the first of its kind for a Hopkins Center ensemble,” Marsit says. 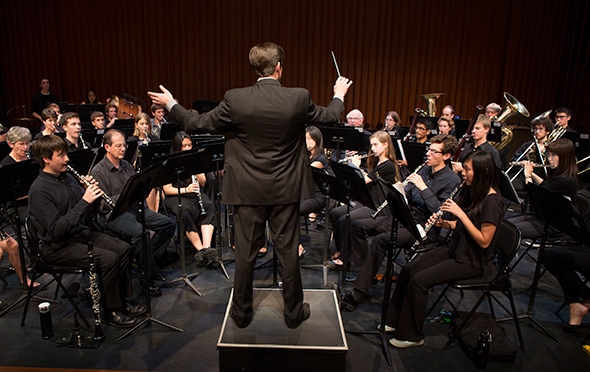 While in Costa Rica, the Dartmouth College Wind Ensemble will give concerts and volunteer with student music programs. (Photo by Rob Strong ’04 )

The DCWE has been involved in a number of service projects closer to home, including partnerships with area schools to mentor young students in the region. Last year saw the launch of Dartmouth Youth Winds, a side-by-side mentoring program for middle-school musicians, led by members of the DCWE.

“Teaching service through ensemble performance has long been a focus of mine as an academic conductor,” Marsit says. “We are so very fortunate to enjoy the opportunities that we have at a place like Dartmouth. I believe it is very important to teach the next generation of professionals about the importance of sharing our good fortune with others.”

DCWE member Josh Perez ’17 is a percussion mentor for Dartmouth Youth Winds. “The simple techniques that have become natural in our own playing aren’t so apparent for these middle-school-aged musicians,” he says. “It makes us appreciate the skills we’ve acquired over the years and may have taken for granted.”

Senior horn player Mitchell Jacobs ’14 has been a DCWE member since his first year at Dartmouth. “Even though music is thought of as a universal language, there are cultural differences in music composition and in the playing technique of a single instrument. One of our pieces by a Costa Rican composer looks like nothing else I’ve seen written for my instrument. I’m excited to share our insights with the younger players while maybe learning something myself from the college-aged crowd.”

Jacobs says working with Youth Winds has readied the group for its trip abroad. “Youth Winds taught me a lot about the unspoken learning that takes place during a rehearsal. I think many of us will be extra aware of ourselves as model players for the younger Costa Rican students.”

“The language skills of our students—the group includes a number of Spanish-speakers—will certainly be an asset for us as we travel,” says Marsit. “That said, most of the students we will work with have some level of English proficiency. National Institute for Music conductor Gabi Mora has been and will continue to be very helpful with any language concerns.”

Major support for the trip came from funds raised for ensemble touring in celebration of the Hopkins Centers’ 50th anniversary last year. There are also significant contributions from the Music Department, the Office of the Dean of the College, the Office of the Provost, and the sociology department, Marsit says; the students have contributed to trip expenses as well.