Transforming the Collegiate Sweater With a Brand New Brand

John Shi ’12 always knew he wanted to be his own boss.

Since middle school—when he says he “caught the start-up bug”—he’s been eager to start his own company. That’s why he founded Hillflint, a new brand of collegiate sweaters. 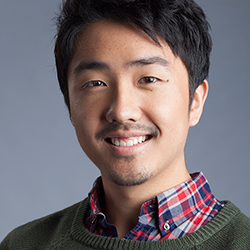 The idea for a well-fitting, affordable collegiate sweater made with quality fabric started to formulate during Shi’s senior year at Dartmouth. Frustrated with what he and his friends considered a lack of good clothing options in the area and in college stores in general, Shi says he played around with the idea of creating his own collegiate sweater brand.

He had been inspired by an iconic photo of Ed Heald ’68 in Take Ivy, a fashion photography book that portrays the early style of the Ivy League. The photo, which depicts Heald in the Thayer dining hall wearing a 1968 class sweater given to freshman athletes at the time, has become a cult classic.

“I just thought it was a really cool sweater. I thought to myself, I want to do that,” says Shi.

After graduating, Shi, who was an economics major modified with philosophy, received a job offer from Amazon to work as a retail analyst. Hillflint became an important side project that he worked on in his spare time.

He started laying out a design for a sweater—one that didn’t bunch up and was slim through the arms and torso—and had prototypes made. He traveled around the world, found a source of 100 percent Merino wool in Australia and a mill in Shanghai—which also serves high-end European brands—where the yarn would be knit into finished garments.

After a couple of successful production runs—mainly sold to the College’s Class of 2012—he brought on a co-founder to help him shape the brand: “menswear guru” Woody Hines. He had met Hines at an internship at the investment company Bridgewater Associates, LP, during his junior year.

After Hillflint had accumulated about $60,000 in sales, Shi eventually made the decision to leave Amazon and focus on Hillflint full time.

“It was ultimately a no-brainer for me,” says Shi of his decision to leave Amazon. “I thought to myself, when I’m old, what am I going to regret more? Not having a comfy career, or not doing something that I really love? The answer was really obvious.”

The fruits of Shi’s labor and intense focus on the brand have already brought success. Hillflint—which now sells class sweaters for Princeton, Yale, Harvard, Cornell, Columbia, and Stanford in addition to Dartmouth—has seen $300,000 in sales thus far and has raised more than $63,000 on Kickstarter, a crowd-funding platform that helps businesses get off the ground. With their Kickstarter campaign for the Mark One Sweater completed, Shi and Hines are continuing down the path to realize their goal of building an affordable luxury knitwear brand.

While Shi has himself and his colleagues to thank for the growing success of Hillflint, he says Dartmouth played a big role in the inspiration for the brand. Like the name, for example.

“’Hill’ came from Dartmouth, since it’s known as the ‘College on the hill.’ And ‘flint’ evoked for us a bit of ruggedness, quality, and sturdiness. The combination is part of our brand and the values that we believe in,” says Shi. “The business wouldn’t really exist without Dartmouth. Dartmouth is the reason we got off the ground in the first place.”

Written by
justine Kohr
Share this
FacebookTwitterEmail
In the News