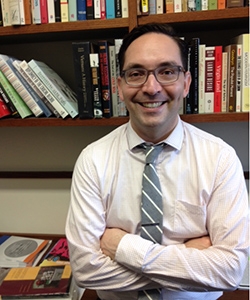 Geraldo Cadava ’00 won the 2014 Frederick Jackson Turner Award for his book “Standing on Common Ground: The Making of the Sunbelt Borderland.” (Photo courtesy of Geraldo Cadava)

Geraldo Cadava ’00, an assistant professor of history at Northwestern University, has won the 2014 Frederick Jackson Turner Award, given by the Organization of American Historians. The award, which recognizes the author of a first scholarly book dealing with some aspect of American history, went to Cadava for Standing on Common Ground: The Making of the Sunbelt Borderland (Harvard University Press, 2013).

Cadava graduated Phi Beta Kappa with high honors in history. He holds a PhD in history from Yale, and joined Northwestern’s history faculty and its program in Latina and Latino studies in 2009, following a year as a College Fellow. 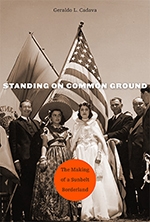 “There’s no doubt that the experience of writing my senior thesis at Dartmouth is what led me to go to graduate school and become a historian,” says Cadava. “I participated in the Mellon Mays Undergraduate Fellowship Program at Dartmouth, which is still thriving because of Michelle Warren’s leadership. The MMUF program is all about encouraging students who are underrepresented minorities to attend graduate school and pursue careers in academia.”

The Dartmouth faculty he studied with “embodied the qualities I still aspire to as a junior professor—generosity, rigor, and the ability to inspire,” he says.