The role of an independent investigator, as well as mandatory expulsion in some cases under proposed rules for responding to sexual assault complaints, was the focus of the sixth of the “Campus Conversations” on Tuesday, April 22.

Dean of the College Charlotte Johnson introduced the most recent session in the “Moving Dartmouth Forward” series, describing the three main elements of the College’s response to the problem of sexual assault as education, prevention, and accountability. 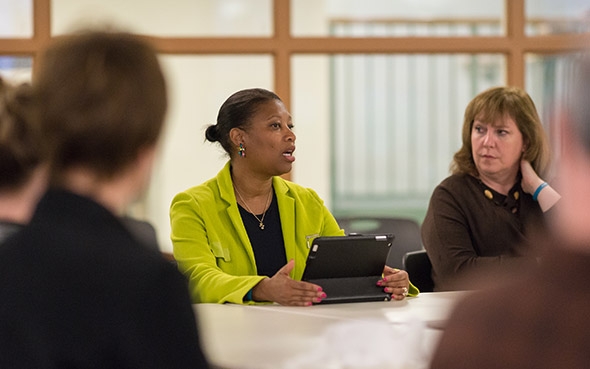 Dean of the College Charlotte Johnson, center, and Director of the Office of Undergraduate Judicial Affairs Leigh Remy, participate in this week’s “Campus Conversations” session. (Photo by Eli Burakian ’00)

Dartmouth is working in all of these areas, she said, but the proposal for unified disciplinary procedures for sexual assault is proceeding through a public comment period and the College is working to gather as many voices on the topic as possible.

Dartmouth’s General Counsel Robert Donin explained that three key elements of the proposed policy are the establishment of a single College-wide process for allegations of sexual assault by undergraduate students and students in any of the graduate and professional schools; use of an independent investigator to deal with complaints of sexual assault; and the institution of the mandatory sanction of expulsion in cases where the investigator finds that the accused engaged in certain conduct, such as threat or use of force, in committing sexual assault.

Director of the Office of Undergraduate Judicial Affairs Leigh Remy opened the floor to discussion, fielding questions about the meaning of “consent” and the creation of a network of advisers and advocates who can be available to help those who are reporting assaults as well as those who are accused.

Those issues are wrapped up in education and training, Remy said. The goal is to create a culture in which conversations can happen before a problem occurs and to foster the understanding that the College “needs to build a community culture that says this is reprehensible.”

The conversation was held from noon to 1 p.m. in the Hood Auditorium, with a second session that evening from 5:30 to 6:30 in Fahey lounge. 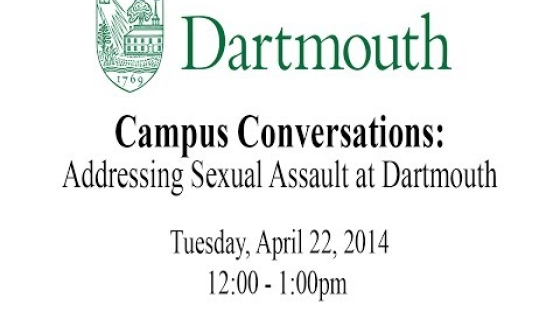 The noontime session was webcast live on the College’s YouTube channel and can be viewed on the “Campus Conversations” page of the president’s website. Members of the community are invited to continue the conversation through the Improve Dartmouth website.

The “Moving Dartmouth Forward: Campus Conversations” series is designed to give community members an opportunity to discuss ideas related to the initiatives of President Phil Hanlon ’77, to generate new ideas, and to advance implementation of the president’s plans to ensure that Dartmouth remains the premiere undergraduate teaching institution while deepening the impact of its scholarship nationally and internationally.

The “Campus Conversations” will continue into the spring; each session takes place from noon to 1 p.m., and again from 6:30 to 7:30 p.m.

Below is the schedule of the sessions, with presenters for each one.