Every Monday, about a dozen veterans, whose service ranges from World War II to Afghanistan, gather in the Murray Room of Hanover’s Howe Library. They are members of a book group started six years ago by Dartmouth Department of Classics Chair Roberta Stewart. But the veterans don’t read a rotating selection of best sellers or historical tomes. Rather, during each 10-to-12 week session, they read one of two works by Homer: The Odyssey or The Iliad. This spring, it happens to be the latter. 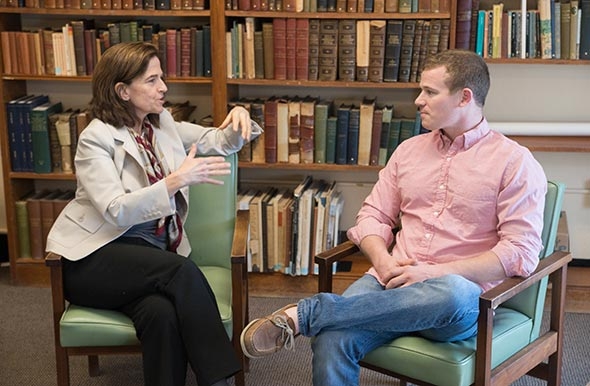 “We talk about what Homer knew and how he understood the problems of war,” says Stewart, who has been teaching Latin, Greek, and ancient history at Dartmouth since 1990. “It’s a book group that takes the intellectual experience of the classroom—engaging with a piece of world literature—and moves it out of the campus and into the public sphere.”

Stewart became interested in working with veterans after reading numerous military blogs during the Iraq War, and contacted the Veterans Administration to propose the reading group. The book group not only gives its members a forum in which to discuss literature, she says, but also enables them to relate their own service experiences to Homer’s two epic poems about the Trojan War.

“In our discussions, I’ve heard really remarkable commentary about what it’s like to lead men, and also incredibly perceptive understandings of what’s lost in war,” says Stewart. “And I’ve developed a greater appreciation for the difficulty of homecoming, especially when we read The Odyssey and discuss Odysseus’ 10-year journey home. A friend—a two tour of duty combat veteran and a clinical psychologist—said to me, ‘Homer offers veterans a map for coming home. The reading groups provide the opportunity to read the map.’”

The group meets every Monday night for 90 minutes and reads Homer aloud in order “to linger and experiment with tone, and to consider the layers of textual and personal meaning,” says Stewart. The current group includes veterans of the conflicts in Korea, Vietnam, Iraq, as well as World War II and Afghanistan veterans. The members are officers and enlisted men, and there are also three undergraduate veterans who are members of the Dartmouth Undergraduate Veterans Association (DUVA).

One of the members is Andy McDonald ’16, DUVA’s vice president. A Marine Corps sergeant who served from 2005 to 2011, McDonald took a Roman history class with Stewart during winter term, and says he “was immediately drawn to the parallels that soldiers have experienced from antiquity up until the present. Professor Stewart has a unique capability in bringing ancient texts to life and illuminating them for modern readers.”

McDonald says he has “certainly connected with the text,” and that Stewart’s book group has also provided him with “unique connections around the Upper Valley. I have met heroes who were shot down and wounded over France, salty Marines who flew missions over Korea, some of our brave soldiers, sailors, and marines of the Vietnam War, and also other men who fought during our present conflicts. It’s great to be around the men that I looked up to and tried to emulate during my own service, and reading The Iliad with them has provided me a unique experience to hear their different perspectives on war, and has also shown the striking similarities between our service.”

Stewart, who in 2012 published the book Plautus and Roman Slavery, calls the book group “some of the most important work I do. The text makes a personal experience a human experience, across cultures and across time. I think that Homer enables the veterans to create a self-narrative about war experience and so construct a narrative about their own return.”

Stewart’s work with veterans has not gone unnoticed. She is now consulting with the Maine Humanities Council in developing a national reading and discussion program for veterans that will be offered in 13 states over the coming year.