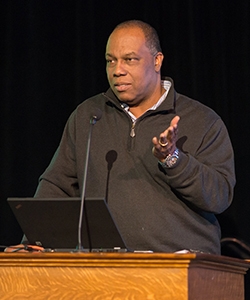 Ellis Rowe ’74, president of BADA, was among the more than 70 people who attended the conference in March. (Photo by Eli Burakian ’00)

A professor of medicine at Yale, Lee has been researching this topic in his free time for the past year. He’s visited Rauner Special Collections Library and used Yale and Dartmouth online resources. Lee found that more than 130 African-American students—a number much higher than originally known to BADA—had studied at Dartmouth prior to 1950, beginning with the matriculation of Edward Mitchell, Class of 1828.

Prior to the Civil War, “Dartmouth was recognized in the African-American community as a place where a man of color could go to get educated,” says Lee. “Some of these students were rejected by other institutions. It’s a fascinating story and one we should be very proud of.” Some of the early graduates of Dartmouth and of Dartmouth Medical School went on to be the first college-educated doctors and lawyers in Liberia, surgeons in the Civil War, a clergyman in Philadelphia, and a civic leader and active abolitionist in Boston.

In admitting Mitchell in 1824, Lee noted, Dartmouth was the forerunner among Ivy League schools, as the next college to admit an African-American student was Harvard in 1870.

Ellis Rowe ’74, president of BADA, was among the more than 70 people who attended the conference. Rowe noted that many alumni were familiar with the history of black alumni at Dartmouth from about 1960 onward, but they were unaware of the depth and richness of their involvement in the College’s history from virtually the founding date of the College in the 18th century.

“Woody showed us that Dartmouth was early in bringing black students to campus—earlier than many of the other Ivies, and earlier than we knew about,” says Rowe. “In many ways we were building upon the history of what students and alumni have accomplished before us.”