Dartmouth’s fencing club won the 2014 U.S. Association of Collegiate Fencing Clubs National Championship on April 5 and 6, in Knoxville, Tenn. Three Big Green women’s squads and three Big Green men’s squads (épée, foil and sabre) competed against 40 other schools. Dartmouth scored a combined 1,675 points to take the overall trophy, besting the University of Michigan (with 1,620 points) and the U.S. Naval Academy (with 1,590). Dartmouth also won gold in the men’s division and in women’s foil, plus six individual medals and top-five finishes for five of the club’s six squads. 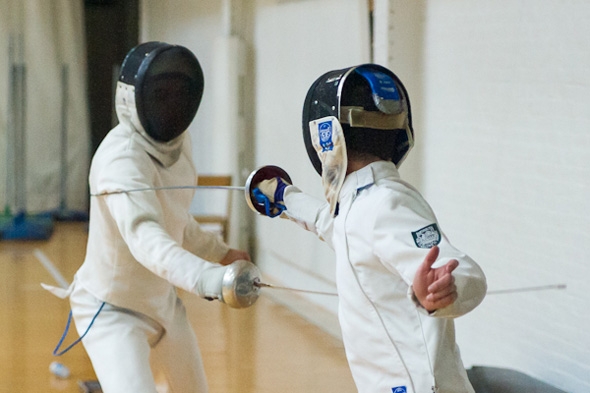 The team is student-coached: Team members don’t just show up at practice but plan practices; they don’t just go to competitions, but also make travel arrangements.

“That’s certainly an added challenge,” says co-captain Scott Brookes ’14. “But it’s part of what makes our team successful. The fact that everybody pitches in makes us all closer.” Dartmouth’s was the only student-coached team among “at least the top eight teams” at the nationals, he notes.

To what does Brookes attribute such success? An especially tight-knit, committed group of seniors (including his fellow co-captain, Gaby Stern ’14), the fact that every top fencer was on campus this term, and the fact that at the nationals, “every single fencer had the best two days of fencing I’ve seen out of any of them.”