Ala’ Alrababa’h ’14, who is from Amman, Jordan, has been named a Junior Fellow at the Carnegie Endowment for International Peace for the academic year 2014-15. The endowment selects 10 to 12 fellows each year—from among graduating seniors nominated by almost 400 colleges—to assist with research conducted by the international think tank’s senior associates. 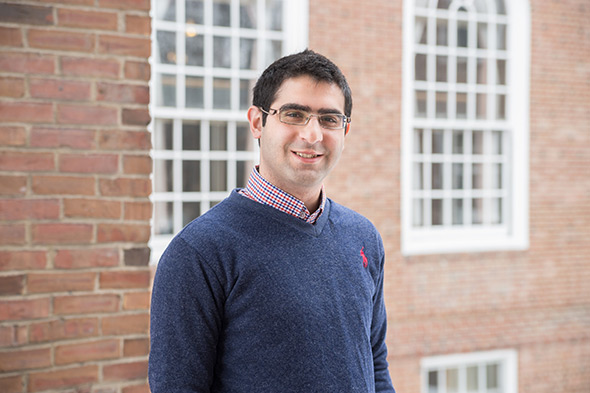 Alrababa’h will join Carnegie’s Middle East program. A government major, he is writing an honors thesis advised by Professor Benjamin Valentino and Professor Anne Sa’adah. “In my thesis I try to explain the level of regime repression in response to nonviolent protests. It was inspired in part by the Arab uprisings. Why did some countries resort to massive repression of protests while others did not?” he says.

While at Dartmouth, Alrababa’h has worked as a researcher with the Center for Nonproliferation Studies in Monterey, Calif., and the Middle East Institute in Washington, D.C., as well as in Dartmouth’s government department as a James O. Freedman Presidential Scholar. He studied at the London School of Economics during his junior year, and has taught English to young refugees in Al-Wihdat refugee camp in Jordan.

His essay, “A World Infinitely More Complex Than I Thought,” will be published later this year in Growing Up Muslim, edited by Professor Emeritus Andrew Garrod. Alrababa’h considers this project “one of the most amazing experiences I had as an undergraduate; the fact that an undergraduate can simply have the opportunity to publish while still studying speaks to the sort of education that is unique to Dartmouth. Not only does Dartmouth have world class faculty, but also those faculty devote much of their time and effort to us undergraduates.”

Following the completion of his Carnegie fellowship, Alrababa’h plans to enroll in a PhD program in political science, with the goal of applying academic research to policy-relevant questions, working in academia or diplomacy.

For more information about the Carnegie fellowship and other competitive scholarship and fellowship programs, visit Dartmouth’s National Fellowships and Scholarships office.

The Carnegie Endowment for International Peace is a private, nonprofit organization specializing in international affairs, whose research and education programs are dedicated to advancing cooperation between nations.