Ben Randolph ’15, has been named a Beinecke Scholar, one of 20 college juniors nationally. The award, which supports the “graduate education of young men and women of exceptional promise,” provides $4,000 prior to entering graduate school and an additional $30,000 while attending graduate school. 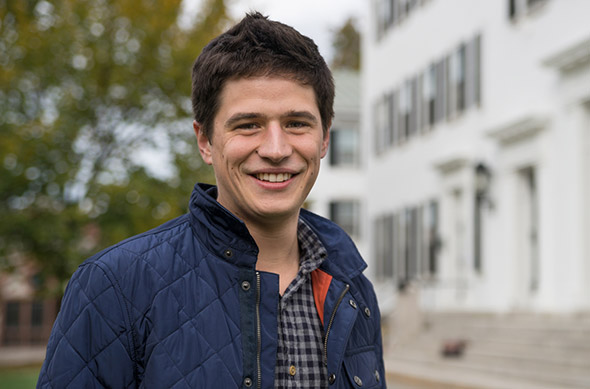 Ben Randolph ’15 has been named a Beinecke Scholar, one of 20 college juniors in the U.S. to received the honor. (Photo by Eli Burakian ’00)

“I’m interested in how, and why, our society privileges some people over others,” Randolph says. “Specifically, I want to ask why some people are naturally seen as having depth and complexity, while others are reduced to having stereotypical, derogatory motivations for their behavior.”

Randolph counts Antonio Gómez, associate professor of Spanish, and Raúl Bueno Chávez, professor of Spanish, among the Dartmouth faculty who have influenced his aspirations. “My current involvement in the Mellon-Mays Undergraduate Fellowship and with my mentor Michelle Warren, professor of comparative literature, is changing the way I view myself as a scholar,” he says. He is writing an honors thesis that “looks at Native literatures and plays for the conceptions of the self that are folded into them.”

After graduate school, Randolph hopes to write, which, he says, was “a passion well before I came to college.” He also hopes to teach: “My goal is to be a professor who allows for a classroom environment that encourages open and difficult conversations. I think that learning to negotiate an environment like that can be really key in changing the way that we relate to each other, to our education, and to ourselves.”

The Beinecke Scholarship Program was established in 1971 by the board of directors of the Sperry and Hutchinson Co. to honor Edwin, Frederick, and Walter Beinecke. The board created an endowment to provide substantial scholarships for the graduate education of young men and women of exceptional promise. Since 1975, the program has selected more than 430 college juniors from 100 different undergraduate institutions.

More information about the Beinecke Scholarship can be found on Dartmouth’s National Scholarships/Fellowships website.