Enrollment in computer science courses at Dartmouth has reached an all-time high, with some courses having nearly doubled the number of students since fall term.

The dramatic increase has made it difficult to find enough classrooms to accommodate the courses, says Professor Thomas Cormen, chair of the computer science department. 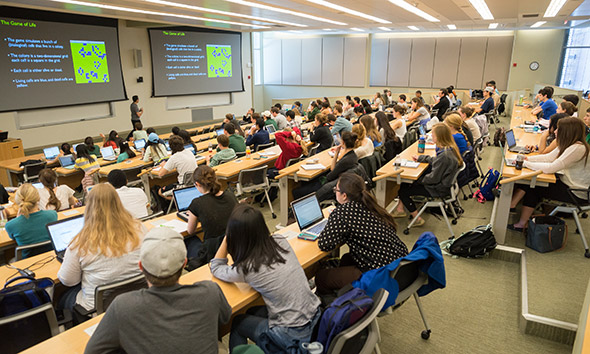 “These are problems we like to have,” Cormen says with a smile.

The rise in enrollment may be due to several factors.

One reason is that there’s been a growing interest in technology among college students, says Cormen. Also, the department conducted an external review in 2009, which helped improve the curriculum.

“The review committee had several suggestions about our curriculum, which we have taken to heart,” Cormen says. The changes included more flexibility for computer science majors and an emphasis on classes that give students more hands-on experiences. “Students have indicated that they appreciate all these changes,” Cormen says.

The reasons for such swings can vary, but Meredith Braz, registrar of the College, says enrollment numbers sometimes reflect the job market. In recent years, she has seen a similar increase in enrollment in economics courses.

“There are shifting trends socially and students start to think that they’d like to take advantage of their years in College to gain certain skill sets to make them more employable,” says Braz.

Dartmouth’s computer science program dates back to the early 1960s, when Professor Tom Kurtz and Professor John Kemeny, who later served as Dartmouth’s 13th president, proposed that the College build a computation center. The two wrote that “whether a student will ever use a computing machine or not, his life is likely to be affected by such machines, and hence, he should know something about their capabilities and limitations. In this sense, contact with electronic brains is as essential as learning to use the library."

Dartmouth heeded the professors’ advice and opened the state-of-the-art Kiewit Computation Center in 1966. The department saw a rise in enrollment around the turn of the century during the dot-com bubble, which eventually leveled out. Cormen hopes this year’s increase is a permanent trend.

“I believe that computer science will continue to attract students for many years to come,” Cormen says. “Why? Because computing is everywhere: in the sciences, the social sciences, and even the humanities.”