Peter Tse ’84, professor of psychological and brain sciences, is among 178 scholars, artists, and scientists in the United States and Canada awarded fellowships from the John Simon Guggenheim Memorial Foundation for 2014. 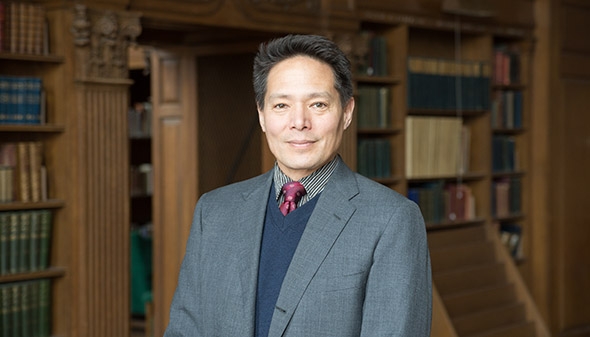 Peter Tse ’84, professor of psychological and brain sciences, has been named a 2014 fellow by the John Simon Guggenheim Memorial Foundation. (Photo by Eli Burakian ’00)

The fellows are selected “on the basis of prior achievement and exceptional promise,” according to the foundation. Tse, who holds a PhD in cognitive psychology from Harvard, is the author of The Neural Basis of Free Will: Criterial Causation (2013).

Tse and his students employ neuroscientific data, gathered using fMRI and other techniques, to show how free will might be realized in the brain.

The fellowship, Tse says, will allow him time to “write about the broader implications of neuroscience research for our understanding of ourselves.” He envisions The Neural Basis of Free Will as the first book of a trilogy on the theme of human freedom, with a focus on what neuroscience has to contribute to answering the question, “What makes a human mind truly free?” The first book, he says, considered the kind of neural code needed to realize free will, and examined data to see whether we have such a neural code. Tse argues that humans do.

But, he says, “just having such a brain will not guarantee that we can act and think freely. In addition we need the capacity to deliberate or imagine outcomes in order to come up with good plans, and we need the motivation, willpower, and self-control required to see our plans through.” The trilogy’s second book, he says, will take on “the neural basis of will” in terms of that trio of attributes, and the third book will consider the neural basis of the human imagination.

Tse joins 2013 fellows Susannah Heschel, the Eli Black Professor of Jewish Studies in the  Department of Religion; and Cleopatra Mathis, the Frederick Sessions Beebe ’35 Professor of the Art of Writing in the Department of English; and 2012 fellow Faith Beasley, professor of French and women’s and gender studies, among current Dartmouth faculty so honored most recently.