Read the full story by Kathryn LoConte Lapierre, published in the Spring 2014 issue of Dartmouth Engineer.

Some undergraduates make their way to engineering with a quick stroll beyond the Dartmouth Green. Others—Thayer School of Engineering’s dual-degree students—travel a more distant route from campuses across the country. 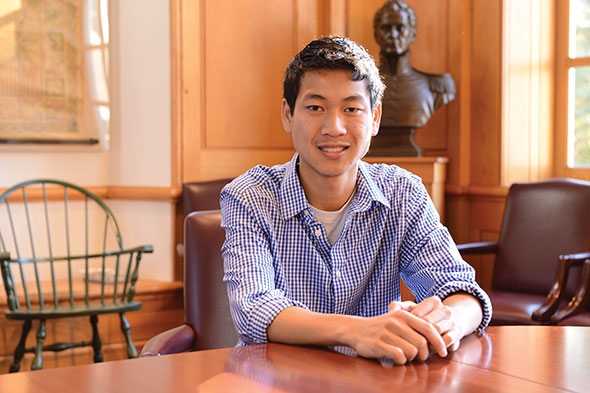 “I wanted the opportunity to explore and solve real world problems, and I knew that Thayer had the curriculum and resources to provide an in-depth and yet broad enough education to tackle that goal,” says Alexander Chin, a Bachelor of Engineering candidate in Thayer’s Dual-Degree Program. (Photo by Kathryn LoConte Lapierre)

Since the early 1970s, Thayer has welcomed undergraduates from other colleges during their junior or senior year and, after they graduate from their own institutions, a year of Bachelor of Engineering study. Originally open to students from the Twelve-College Exchange Program—Amherst, Bowdoin, Connecticut, Mount Holyoke, Smith, Trinity, Vassar, Wellesley, Wesleyan, Wheaton, and Williams, besides Dartmouth—Thayer’s Dual-Degree Program extended engineering to a wider number of young men and women with science backgrounds. Other colleges joined the program over the years. Colby, for example, began sending students in 1990. Today some 20 colleges officially participate in the Dual-Degree Program, and students at other institutions can apply for the program as well.

During the last decade, 104 students graduated from the Dual-Degree Program with their Bachelor of Engineering degrees. This year, 22 of Thayer’s 58 Bachelor of Engineering candidates are dual-degree students. Another 29 dual-degree students are completing their first year, fitting six engineering courses into a tight time frame. “They’re very enthusiastic,” says Professor Eric Hansen, director of the Dual-Degree Program. “They’ve bonded with their home colleges, yet they so want to do engineering that they uproot themselves to come here. They’re determined, they take a tough course load, and they enjoy what they’re doing.”

Seven students, including Alexander Chin, a Bachelor of Engineering candidate in the Dual-Degree Program, spoke with Dartmouth Engineer about what drew them to Thayer.

Chin, who attended Carleton College, says, “From Carleton I developed a broader skill set in the liberal arts, and here at Dartmouth I developed a foundation in engineering. The Dual-Degree Program made me think in a more structured and more logical manner than I did before. Thayer added the innovative dimension. I’d like to combine my interests in an energy technology consulting role. That type of job would provide the dynamic that I’m looking for.”