Shoshana Silverstein ’15 has been chosen as a 2014 Harry S. Truman Scholar. She is one of 59 college students, mostly juniors, awarded scholarships of up to $30,000 to pursue graduate studies in public service fields. The program also provides assistance with career counseling, internship placement, graduate school admissions, and professional development. 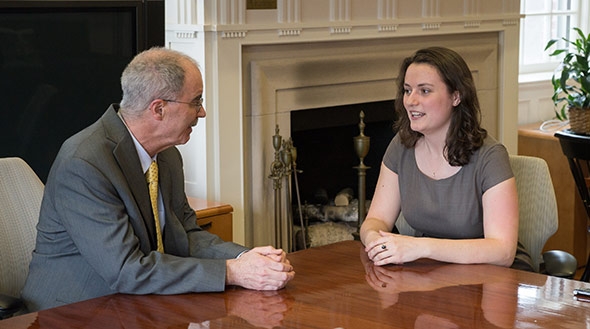 President Phil Hanlon ’77 met with Silverstein earlier this week to congratulate her. “It’s a thrill to have a Dartmouth student win a Truman,“ Hanlon told her. “You know how selective the Truman is and how much they are looking for leadership and commitment to public service.”

“I am incredibly honored,” replied Silverstein. “When I was first doing the Truman application, I had the great opportunity to reflect and think about what I have done and what I want to do.”

Silverstein, a government major and public policy minor from Hyde Park, Vt., hopes to pursue a four-year joint law degree  and masters in public policy following her graduation from Dartmouth.

At Dartmouth, Silverstein has been deeply involved with the Nelson A. Rockefeller Center for Public Policy and the Social Sciences. She has been part of the Center’s Management and Leadership Development Program and its Global Leadership Development Program, as well as its Public Policy Shop. She has also been a leader of VoxMasters, a student-run public speaking club. As a James O. Freedman Presidential Scholar, Silverstein serves as a research assistant to Jeremy Horowitz, assistant professor of government. She is an executive board member and the former president of Dartmouth’s chapter of J Street U, a national advocacy group supporting a two-state solution to the Israeli-Palestinian conflict and is a Dickey Center War and Peace Fellow.

Silverstein traveled to India over winter break to study Indian economic policy reform as part of the Practicum on Global Policy Leadership led by Charles Wheelan ’88, senior lecturer and policy fellow at the Rockefeller Center. She was also recently selected as a 2014-15 Presidential Fellow in the Center for the Study of the Presidency and Congress.

Silverstein followed the lead of her sister Sara in coming to Dartmouth. “My sister was an ’07, so I spent a fair amount of time here,” she said. “The Rockefeller Center is what drew me here in the first place, along with the size and location of the school.  Everything just fit what I was interested in.”

“As someone who was homeschooled my entire life prior to coming to Dartmouth, I have been and am very interested in education policy,” she said. “This interest was in part what caused me to consider a career in policymaking and the law.” Silverstein sees herself working in the U.S. government in a policymaking capacity, but, she said, “I have a broad range of interests that I hope to study in law school and work on later in my career.”

The 2014 Truman Scholars were selected from among 655 applications from 293 colleges and universities. Among the qualifications: Recipients must be U.S. citizens, have outstanding leadership potential and communication skills, and be committed to careers in government or the not-for-profit sector. Silverstein joins recent Dartmouth Truman Scholars Brandon DeBot ’14, Emma Smith ’13, and Christian Brandt ’12.