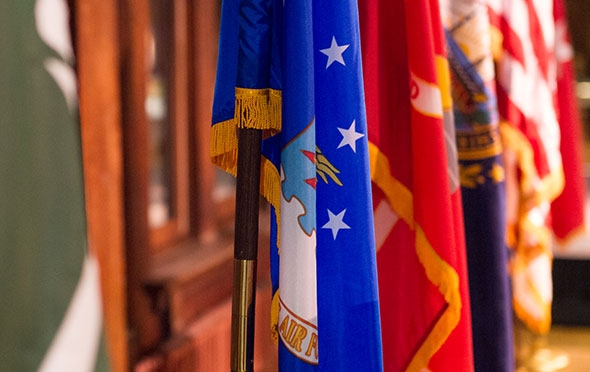 Will Corbett ’10, an assistant director of admissions, says, “The admissions office was impressed by DUVA’s initiative and desire to highlight the benefits of a Dartmouth education to military veterans.” Before making the trip to Washington, the students had consulted Corbett—who is the point of contact for veterans applying to Dartmouth as undergraduates—and other Dartmouth officials.

“Traveling to Walter Reed National Military Medical Center to speak with wounded service members was a powerful personal experience,” says Allen. “To hear the passion with which these men and women speak about continuing their education, when they are at Walter Reed, still recovering from serious injuries, is impressive and inspiring.”

Brandon, DUVA’s outreach and admissions officer, considers the trip a success. “The veterans we spoke with were excelling at their respective institutions and looking for a new challenge. Speaking about our personal experiences and our own unique pathways to Dartmouth showed these veterans that an Ivy League education is an attainable and realistic goal.”

A thank you note the group members received from a Marine they’d met at Walter Reed gives Allen confidence that their message connected with the veterans. The Marine, Allen says, wrote that he had always heard great things about Dartmouth’s tight knit community, but he didn’t fully understand it until hearing the group’s stories first-hand. “He told us it’s like saying, ‘I’m a Marine.’ ” He said he had yet to meet an organization that espoused a similar loyalty to members, ‘and then I met you all and Dartmouth.’ ”