The Barry M. Goldwater Scholarship and Excellence in Education Program, established by Congress in 1986, seeks to provide the United States with a continuing source of highly qualified scientists, mathematicians, and engineers by supporting college students who intend to pursue careers in these fields. The scholarships will cover the cost of tuition, fees, books, and room and board up to a maximum of $7,500 per year. 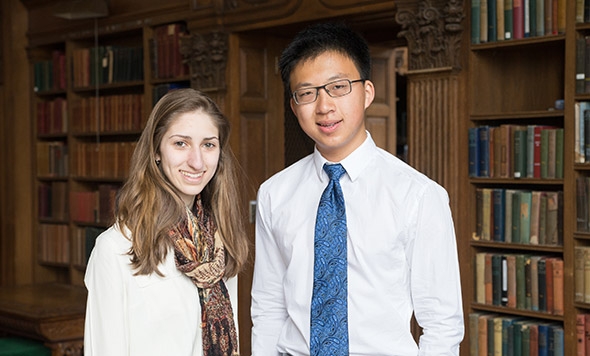 Hammer and Chen are two of 283 sophomores and juniors selected on the basis of academic merit from a field of 1,166 mathematics, science, and engineering students who were nominated by the faculties of American colleges and universities.

Kristin O’Rourke, assistant dean for scholarship advising, says the Goldwater Scholarship recognizes the most promising young scientists and researchers across the country. “The Goldwater invests in future pioneers in the sciences, and we are delighted that two of our students are among them,” she says. “These awards reflect the hard work and dedication to research characteristic of Dartmouth’s student scientists.”

Calling her first-year experience with Dartmouth’s Women in Science Project (WISP) “integral in strengthening my interest in scientific research,” Hammer says Meredith Kelly, assistant professor of earth sciences, and graduate student Laura Levy “served as excellent role models, were positive and complimentary, and encouraged me to pursue my scientific interests.”

Subsequently, Hammer has researched cellulosic biofuels in the lab of Lee Lynd, the Paul E. and Joan H. Queneau Distinguished Professor in Environmental Engineering Design at Thayer School of Engineering. “The experience has not only been instructive, rewarding, and helped me understand the complexity of the field, but has also confirmed my ambition to study alternative fuels in the future,” says Hammer, who intends to pursue a PhD in chemical engineering.

Chen’s path toward bioinformatics research began with a first-year campus job working with the Dartmouth-MIT computational linguistics group. Skills acquired there, plus studies in computer science and biology, landed him a summer position at the National Institutes of Health.

“Because of my amazing peers that summer,” Chen says, “I became absorbed in entrepreneurship and interdisciplinary thinking” that has led to several published academic papers as well as to his developing programs “ranging from high-dimensional biological visualization software to artificial intelligence that ‘reads’ scientific literature as papers are published.”

Chen plans to combine an MD with a PhD in computer science and to conduct computational research on biological and biomedical topics.