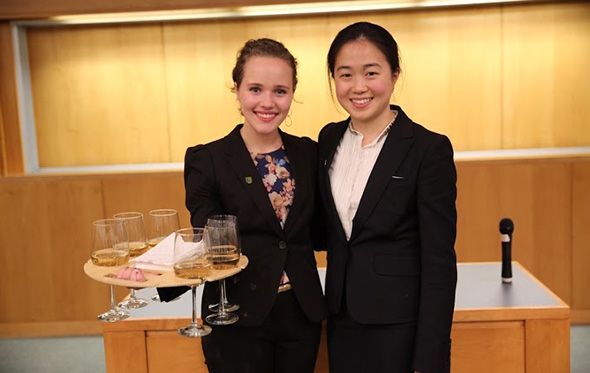 The competition, supported by Dartmouth’s Office of Entrepreneurship and Technology Transfer, is part of an initiative launched by President Phil Hanlon ’77 to transform student innovation into businesses and social ventures that benefit the public.

Tray Bien emerged last semester from an “Introduction to Engineering” class at Thayer School of Engineering taught by Professor Ulrike Wegst, who challenged students to identify industry needs and develop portable solutions. Miles, Kamei, and other team members discovered a need while at an area restaurant, where a waitress told them she and her coworkers suffered from tendonitis and were “just waiting for carpal tunnel” from carrying heavy, awkward serving trays.

“We observed that the standard serving tray in restaurants was begging for improvement,” says Miles. The Tray Bien team members designed several “messy prototypes” that they tested on area wait staff before arriving at “the ultimate improved ergonomic serving tray.”

Through Dartmouth connections, the team was invited to exhibit at a mid-Atlantic food-service industry trade show in March, and received nearly 2,000 orders for the product.

A team of Tuck students led by Samuel L. Alexander, Tuck ’14, earned second place and $10,000 for Latitude six-six, an adventure travel company that organizes tours guided by native community members in Northeast Alaska. Alexander, Jordan A.B. Melcon, Tuck ’14, and Ryan A. McDonald, Tuck ’14, all avid travelers, identified adventure travel as a lucrative market sector and seek to meet growing demand for wilderness experiences in beautiful, remote locations. A native of Fort Yukon, Alaska, and member of the Gwich’in tribe, Alexander is committed to creating sustainable economic opportunities for his community.

“To be a successful entrepreneur, you have to have passion and purpose,” he says.

The third-place prize and $5,000 were awarded to government major Sebastian M. DeLuca ’14 and his team for PromoteU, a management software platform that assists industries and agencies with recruiting and hiring college students as brand ambassadors for their products and services. Bored by his previous campus jobs, tech-savvy DeLuca began helping businesses with digital marketing. He discovered that companies such as Spotify and The New York Times lack the technology tools to reach 18- to 24-year-olds, and also that college students are looking for interesting and rewarding campus jobs. He built PromoteU to bridge this gap.

“The judges liked that we have an awesome team and have been making a lot of progress in forging industry partnerships,” DeLuca says. “PromoteU wouldn’t exist without Dartmouth.”

The success of these student entrepreneurs reflects Dartmouth’s expanding commitment to organizing and energizing the entrepreneurial system at Dartmouth and in the region, according to Jamie Coughlin, director of New Venture Incubator Programs and the Dartmouth Regional Technology Center.

“These students are off to a wonderful start,” Coughlin says. “They have assembled good teams, found advisers, mentors, and partners, and are acquiring capital to bring their new ventures to the marketplace. The Office of Entrepreneurship and Technology Transfer was created to further support such endeavors.”