Shonda Rhimes ’91, the creative force behind several acclaimed television series, including the current ABC hit Scandal, will deliver the main address at Dartmouth’s 2014 Commencement exercises on Sunday morning, June 8, on the Green. 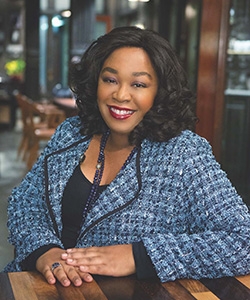 Rhimes, a Golden Globe winner and three-time Emmy nominee, is also the creator, head writer, and executive producer of medical dramas Grey’s Anatomy and Private Practice. President Barack Obama appointed her to serve as a trustee for the John F. Kennedy Center for the Performing Arts in 2013, and that same year TIME magazine—for the second time—named Rhimes one of the 100 most influential people in the world.

In 2013, Rhimes won the NAACP Image Award for Outstanding Drama Series for Scandal, and in 2014 she received the Directors Guild of America’s Diversity Award. Additionally, she has been named to Fortune’s “50 Most Powerful Women in Business,” Variety’s “Power of Women” and Glamour’s “Women of the Year.”

Dartmouth President Phil Hanlon ’77 will deliver the Valedictory Address to the graduates. Also speaking will be the student valedictory speaker from the undergraduate senior class. The valedictory speaker will be announced the week of Commencement, after final grades are calculated.

The other honorary degree recipients are:Dartmouth typically awards about 1,000 bachelor’s degrees and 600 master’s and doctoral degrees in the arts and sciences and from the College’s three professional schools: the Geisel School of Medicine, Thayer School of Engineering, and the Tuck School of Business.

Shonda Rhimes ’91 is widely acknowledged as one of the most creative and powerful showrunners working in Hollywood today. An award-winning writer and producer of television shows and films, she formed her own production company, Shondaland, in 2004.

In addition to her network television success, Rhimes wrote the feature films Princess Diaries 2: A Royal Engagement and Crossroads. She co-wrote Introducing Dorothy Dandridge, for which Halle Berry won a Golden Globe and an Emmy for Best Actress in a miniseries.

Rhimes grew up in an academic family in Chicago, and loved books and storytelling even as a young child. An English literature with creative writing major, she was director of Dartmouth’s Black Underground Theatre and Arts Association, and her work earned her numerous awards for excellence as an undergraduate. After a brief stint in advertising, Rhimes earned her MFA from the University of Southern California’s School of Cinematic Arts, where she was awarded the Gary Rosenberg Writing Fellowship. She resides in Los Angeles with her three daughters. 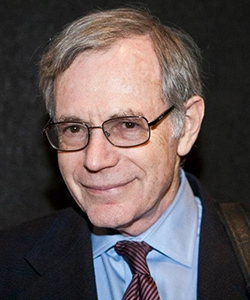 Eric Foner is the DeWitt Clinton Professor of History at Columbia University. A renowned teacher and prolific author, his 2010 book, The Fiery Trial: Abraham Lincoln and American Slavery, won the Bancroft Prize, the Pulitzer Prize for History, and the Lincoln Prize.

Foner studies 19th-century American history, the American Civil War, and slavery, at the intersection of intellectual, political, and social concerns. His 1988 book, Reconstruction: America’s Unfinished Revolution, 1863-1877, is considered the standard source on the era.

Foner holds bachelor’s degrees from Columbia and Oxford, and a PhD from Columbia. He is a member of the American Academy of Arts and Sciences and the British Academy. A committed public historian, he was the on-camera historian for PBS’s Freedom: A History of US. He has lectured extensively to both academic and non-academic audiences, and served as a curator and consultant to historic sites and museums. 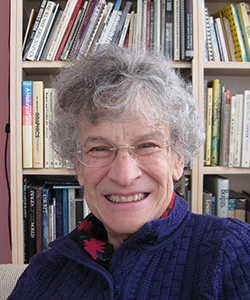 Margaret Geller (Doctor of Science) Astrophysicist and cartographer of the universe

Margaret Geller is a world-renowned astrophysicist currently serving as a senior scientist at the Smithsonian Astrophysical Observatory. She is a member of the National Academy of Sciences and the American Academy of Arts and Science, and is the recipient of numerous international prizes and prestigious lectureships.

Geller holds a bachelor’s degree from the University of California, Berkeley, and a master’s and PhD from Princeton. A 1990 MacArthur Foundation “genius grant” winner for her work in astrophysics, Geller studies the formation of stars—including the development of hypervelocity stars, a phenomenon she co-discovered—and of the Milky Way. She maps the distribution of dark matter throughout the universe, as well as the distribution of galaxies, all part of her aim to understand the immense patterns that surround us.

Her dedication to science education and communication has led her to an active public presence as a lecturer, filmmaker, and subject of many media interviews. 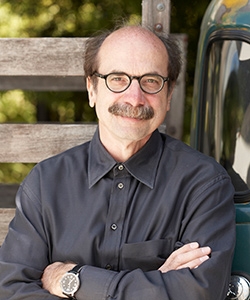 David Kelley, founder of the design firm IDEO, counts among his team’s many creations the first mouse for Apple computers. A professor at Stanford University and a founder of Stanford’s Hasso Plattner Institute of Design (commonly known as the d.school), Kelley is a pioneer in “design thinking,” an innovative approach that incorporates human behavior in design. He is the co-author of Creative Confidence: Unleashing the Creative Potential Within Us All.

Kelley received the 2005 Sir Misha Black Medal for his “distinguished contribution to design education,” one of many awards for design and innovation with which he has been honored. He is a member of the National Academy of Engineers; he holds a degree in electrical engineering from Carnegie Mellon University, and a master’s from Stanford’s Joint Program in Design. 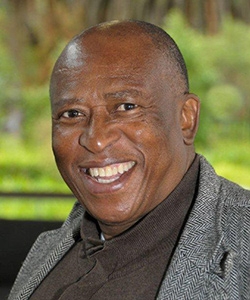 Zanemvula Kizito Gatyeni Mda, who writes as Zakes Mda, is a novelist, poet, and playwright, and a professor of creative writing at Ohio University. Born in South Africa, he holds degrees from Ohio University and the University of Capetown. His novel The Heart of Redness won the 2001 Commonwealth Writers Prize for Africa as well as the inaugural Sunday Times (South Africa) Fiction Prize.

Mda grew up in a household deeply engaged in South Africa’s politics. His father, Ashby Peter Mda, was a colleague of the late Nelson Mandela. Zakes Mda published an autobiography, Sometimes There Is a Void: Memoirs of an Outsider, in 2012, and the novel The Sculptors of Mapungubwe, in 2013.

Mda is a founding member of the African Writers Trust. He divides his time between Ohio and South Africa, where he is a dramaturge at the Market Theatre in Johannesburg and a director of the Southern African Multimedia AIDS Trust in Sophiatown, Johannesburg.

A variety of ceremonies take place before Commencement, including Class Day and Investiture ceremonies for Dartmouth’s three professional schools, and Baccalaureate, a multi-faith service open to all graduates and their guests. Speakers will be added on the Commencement website as further information becomes available. The events, in chronological order, are: