Allan Houser (1914–1994), one of the best-known Native American artists of the 20th century, continues to be an influential figure in the field of Southwestern sculpture in the United States. This May, the Hood Museum of Art installed five sculptures by Houser in the Maffei Arts Plaza, adjacent to the museum and the Black Family Visual Arts Center. 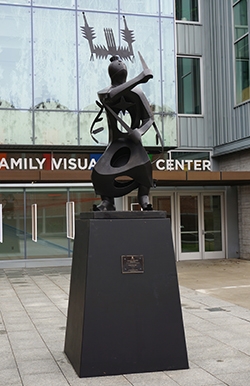 These works represent a cross section of his large three-dimensional work from the years 1986 to 1992. There will also be two sculptures by Houser on view in the museum this spring—one in the downstairs galleries, and the other in the exhibition “In Residence: Contemporary Artists at Dartmouth,” which is devoted to the long and exemplary history of the Artist-in-Residence Program at the College. Houser was artist-in-residence in 1979, and the Hood collection includes several sculptures by him, one of which is permanently on view on the lawn of north campus’s Sherman House, home of the Native American Studies Program.

Additionally, in September, the Studio Art Exhibition Program and the Hood will present an exhibition of Houser’s drawings and smaller sculpture in Strauss Gallery at the Hopkins Center, curated by Gerald Auten, senior lecturer and director of the exhibition program for the Studio Art Department. The outdoor sculpture and drawings from the artist’s estate are lent to the museum by the Houser Foundation, Inc., under the guidance of Dave Rettig ’75, the curator of collections at the foundation.

“The Hood Museum of Art is delighted to join museums across the country in celebrating the work of Allan Houser. That his legacy includes his residency and work at Dartmouth is even more reason to mark the occasion with the presentation of these dynamic sculptures,” said Michael Taylor, director of the Hood Museum of Art. 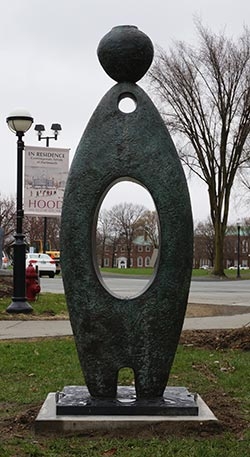 Houser was a member of the Chiricahua Apache, a group that was imprisoned for 27 years after the surrender of Geronimo. Houser was the first child born out of captivity after they were released; his mother had been born while the group was still incarcerated. He enrolled in painting school at the Santa Fe Indian School as a young man and began his career as a mural painter at the end of the Depression. His first marble carving was a monument to the Native Americans from the Haskell School in Lawrence, Kan., who died in World War II.

In the early 1950s, he began teaching art at the Inter-Mountain Indian School in Brigham City, Utah. Eleven years later, he became a professor at the Institute of American Indian Arts in Santa Fe, where he primarily taught sculpture, finally retiring in 1975 to pursue his artistic career. As a sculptor, he worked in stone and bronze, and occasionally in wood.

The five sculptures in this exhibition demonstrate Houser’s distinctive achievements in the genre. While he is well known for his Native American subjects, such as Abstract Crown Dancer II (1992) (see image) and Morning Solitude (1989), he is less associated with abstract modernism—this despite the fact that he was equally invested, particularly in his later career, in the creation of simpler forms. In both modes of expression, he sought a sense of the enduring spirit and centered being. He related his work to music. “I put this rhythm into it, the beautiful rhythms of song my dad used to sing and stories he told about. This way, the feelings I have are getting across, I hope—the sympathy I have for the Indians, and the dignity I see in them.” This is as true for his elegant abstractions as for his sculptures that depicted Native American subjects. 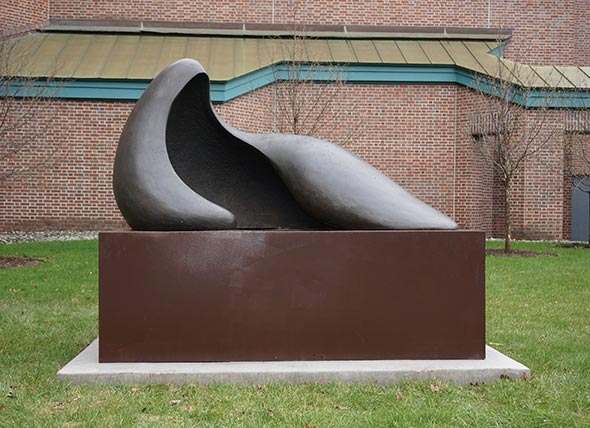 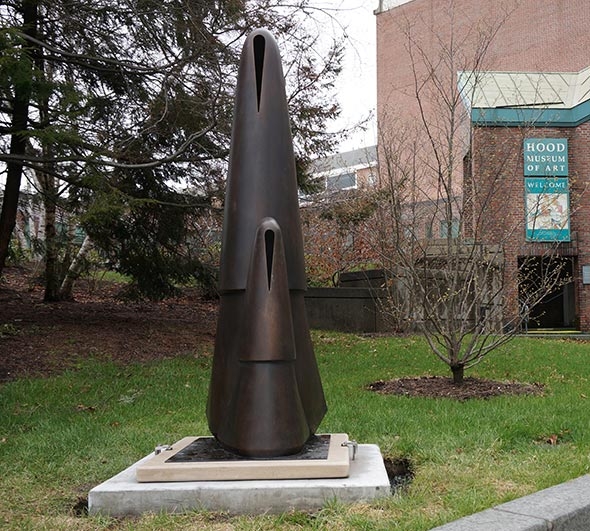 Allan Houser, “This Was Our Home,” 1993, bronze, edition of 6. © Chiinde LLC, exhibition loan courtesy of Allan Houser, Inc. (Photo by Alison Palizzolo)
Written by
Office of Communications
Share this
FacebookTwitterEmail
In the News