Dean of the College Charlotte H. Johnson has accepted the position of vice president for student affairs and dean of students at Scripps College, the women’s college within the Claremont University Consortium in Claremont, Calif. She will leave Dartmouth at the end of the academic year. 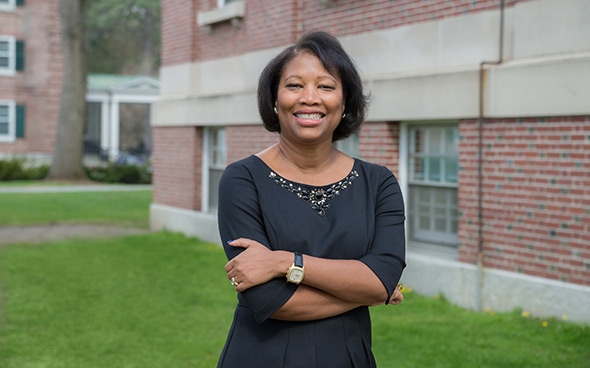 Dean of the College Charlotte Johnson will leave Dartmouth after three years for a position at Scripps College in Claremont, Calif. (Photo by Eli Burakian ’00)

“It is with a sense of deep gratitude for her courageous and effective leadership at Dartmouth that we offer our congratulations to Charlotte on this exciting new opportunity,” says President Phil Hanlon ’77. “Charlotte has worked tirelessly to support and strengthen the community life of the College. She was never afraid to take on the challenges of combating high-risk behavior, and her efforts have been effective in moving us forward.”

President Hanlon today notified the campus community of Johnson’s new position in a letter to faculty, staff, and undergraduates.

“We selected Charlotte through a national search that yielded an absolutely stellar group of candidates,” says Scripps President Lori Bettison-Varga. “She has built an impressive career as a student affairs professional, educator, and sought-after presenter on diversity and pipeline issues.”

Johnson says she is honored by this new opportunity.

“My tenure at Dartmouth has been immensely rewarding and I am proud of the progress and innovative work we have undertaken over the last three years,” she says. “It has been an honor to have been part of Phil Hanlon’s leadership team as he laid out his bold vision for the future of Dartmouth.”

In addition to her oversight of student life at Scripps, Johnson will be responsible for support and development of a student leadership institute and will have the opportunity to teach. During Johnson’s tenure at Dartmouth, advising services for first- and second-year students have been expanded, an innovative advising program is being piloted, access for mental health support at Dick’s House is greatly improved, and late-night programming activities grew through the expansion of the Collis Center and the new Sarner Underground, a 24/7 social space for students. Under Johnson’s leadership, residential life at Dartmouth is being re-envisioned with several new living-learning communities to open this fall, and other innovations are under consideration.

Under Johnson’s stewardship, Dartmouth experienced a three-year decline in high blood-alcohol level emergency cases through education and prevention programs. Johnson’s contributions extend to sexual assault prevention and education. In partnership with national expert Jennifer Messina ’93, Johnson and her team created the Dartmouth Bystander Initiative, designed to provide students with skills to identify and interrupt situations in which a sexual assault may occur. Dartmouth’s sexual assault response team, the creation of the Center for Community Action and Prevention, and recently proposed changes to the adjudication of sexual misconduct cases are among Johnson’s accomplishments.

As vice president for student affairs at Scripps, Johnson will be part of the leadership team of the liberal arts women’s college, which has an enrollment of just under 1,000 students. Scripps is part of the Claremont University Consortium, which includes six other independent colleges and has a total of 6,300 full-time students on adjacent campuses in Claremont, Calif. The other Claremont colleges are Pomona College, Claremont McKenna College, Harvey Mudd College, Pitzer College, Claremont Graduate University, and Keck Graduate Institute.

Johnson came to Dartmouth in 2011 from Colgate University, where she was dean for five years. Prior to Colgate, she served from 2000 to 2006 as assistant dean for student affairs at the University of Michigan Law School. Johnson came to higher education following a highly successful career as a lawyer.