At the annual Celebration of Athletic Excellence on May 19 the Dartmouth College Department of Athletics honored seven individual student-athletes and several teams for their achievements in 2013-14. 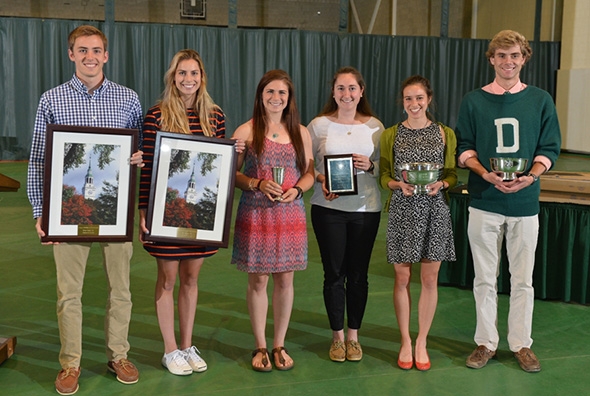 The biggest winner of the night was Abbey D’Agostino ’14 of the women’s cross country and track teams. The Topsfield, Mass., native was the recipient of the Kenneth Archibald Prize as well as the Class of 1976 Award.

Dartmouth’s highest athletic honor, the Kenneth Archibald Prize, is presented annually to “the member of the graduating class who has been four years in attendance, who has been the best all-around athlete, regard also being had to moral worth and high standing in scholarship.“ The Class of 1976 is presented annually to the most outstanding female athlete of the year. A stellar senior season has pushed D’Agostino into the realm of the most outstanding Ivy League student-athletes ever. Her seven national championships to this point are the most ever by any one person—male or female—at any Ancient Eight institution, and she ranks second all-time among all NCAA individuals in any sport.

Will Geoghegan ’14 of the men’s cross country and track teams was awarded the Alfred E. Watson Trophy, presented each year to the most outstanding male athlete of the year. A two-time All-American across two seasons of competition this year, Geoghegan posted the top finish by a male Big Green runner at the cross country national championship meet in over a decade, taking 14th place.

The Class of 1948 Scholar-Athlete Awards, given ”to one male and one female of the junior class, who have combined outstanding performance in athletics and significant achievement in academics," were presented to Ali Savage ’15 of the field hockey team and Silas Talbot ’15 of the cross country, track and field, and ski teams.

Ari Kenyon ’14 of the women’s soccer team was the winner of the Class of 1950 Award as “the varsity student-athlete who has demonstrated the most extraordinary commitment to community service.”

Ian Woon ’15 of the men’s swimming and diving team received the Timothy Wright Ellis Award, which is given to a male student-athlete showing extracurricular and scholastic drive, spirit, loyalty, and amiability, as voted on by the captains of the men’s teams.

Alex St. Romain ’14 of the softball team was honored as the recipient of the Agnes Kurtz Award, given to “that woman who best combines proficiency in athletics with dedication to the furthering of women’s sports” as nominated and voted on by the captains of the Big Green women’s teams.