Dartmouth Celebrates BASIC in Past, Present, and Future

There was a huge turnout at Dartmouth’s party on April 30 to celebrate the 50th anniversary of the BASIC programming language and the Dartmouth Time Sharing System, which were launched during an all-nighter that spilled into the early morning of May 1, 1964. 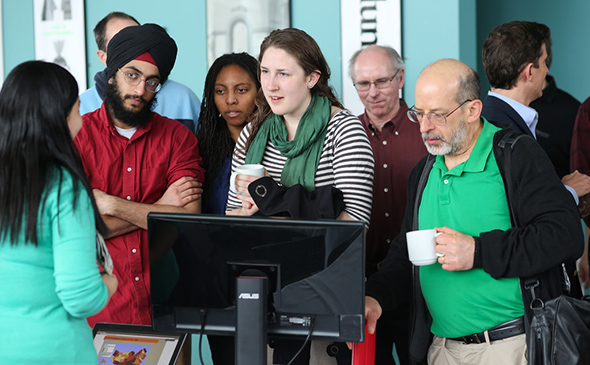 Students, alumni, BASIC veterans, and others check out exhibits from DALI Lab and Tiltfactor during the BASIC at 50 interactive exhibit created by undergraduates. (Photo by Rob Strong ’04)

“There were a lot of all-nighters. Afterwards, we went to bed; John Kemeny went to teach. He’d have to go to some freshman math class,” said John McGeachie ’65 at the celebration Wednesday. McGeachie, along with Mike Busch ’66, solved the problem of enabling different GE computers to communicate in 1964.

Kemeny, at the time head of the Dartmouth math department and later president of the College, and math professor Tom Kurtz explained years later the magnitude of these undergrads’ effort by noting that one of the computers “did not even have a manual, since it was never intended to be programmed outside the factory.”

Kurtz was the historic and visibly bemused anchor of the celebration that began with the documentary The Birth of BASIC. The film was followed by a panel discussion led by President Kemeny’s daughter Jennifer Kemeny ’76, which included Kurtz, McGeachie, and many of the original team of ’60s-era undergraduates who had a hand in ushering in the digital age from the basement of College Hall—Steve Garland ’63, Ron Martin ’67, Sidney Marshall ’65, and many more.

Also Wednesday, timed to coincide with the Basic at 50 celebrations, President Phil Hanlon ’77 announced that William H. Neukom ’64 has committed $10 million to fund the William H. Neukom Academic Cluster in Computational Science. The cluster will include three new faculty members in diverse fields who use advanced computational techniques in their work. One of the new professorships will be a distinguished chair named for Kurtz.

“With this remarkable gift, Bill Neukom honors Dartmouth’s storied past in computing, and leads us to a bright and exciting future,” Hanlon said.

The Hood auditorium was standing-room only for “The Past” portion of the celebration, during which BASIC veterans talked shop and took questions that trended on the theme of: “How could you tackle such a monumental task?” There was a theme to the answers, as well.

“We were like sculptors. We knew it was in there,” said Martin. “And it was the best toy around.”

“We didn’t know any better. We were just having fun,” said Marshall.

The crowd moved to the Top of the Hop at the Hopkins Center for the Arts, where they mingled with current undergraduates who are exploring new ways to use computing and computational science. “The Present” featured interactive displays by students, including work from Tiltfactor, a development laboratory that explores game design for social change, and DALI labs, where students and faculty focus on communicating complex ideas and data in meaningful ways, using a mix of technology and design. Students were operating quadcopters with hand gestures, and people were playing “POX: Save the Puppies” on android devices.

At one display, Andrew Beaubien ’16 talked with Hope Wilson ’16 about an environmental and economic modeling program on display, which they used in a class at Thayer School of Engineering to calculate the market for solar energy over time.

Beaubien, who is John Kemeny’s grandson, said the day brought him a profound sense of the continuum of learning and exploring that goes on at Dartmouth. He said watching the Birth of BASIC documentary gave him a new link to his grandfather, who died when he was very young.

“I learned a lot today,” he said. “I really got to see the past through the eyes of those who lived it.”

“The Future,” a panel discussion with futurists Brian David Johnson of Intel, Michael Jones of Google, and Daniela Rus, director of the Computer Science and Artificial Intelligence Laboratory at the Massachusetts Institute of Technology, returned to the importance of BASIC again and again.

Musings on bacterial data processors, the coming physicality of computational science, and universal connectivity were all traced back to a BASIC moment at Dartmouth.

“The fundamental magic of BASIC,” said Jones, “was that it let people play with computers without schedules, with no punishment if it wasn’t right. You’d just change the line and write again.”

As McGeachie wandered through the student exhibit in “The Present,” he offered a similar insight.

“We built the tool, or the first tools. These students are the next step in building things that are useful,” he said. “Now the trick is—the tools you need are there—what do you do with them?”