Geisel Student Voices: ‘The Tide Is Turning in Nigeria’

Despite the recent violence and kidnappings in Nigeria, Ayobami “Ayo” Olufadeji, a third-year medical student at the Geisel School of Medicine, is determined to improve conditions in his home country. In his essay “The Clash Between the Nigeria of My Dreams & Our Reality,” Olufadeji writes, “The tide is turning in Nigeria and I believe we are on the brink of change—I am working to make sure that I am ready to do my part.” 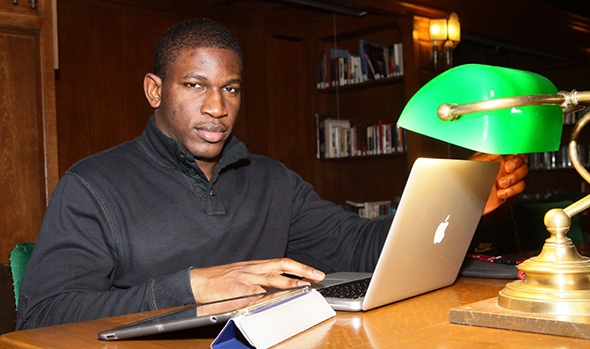 Ayobami “Ayo” Olufadeji is a third-year medical student at the Geisel School of Medicine. (Photo by Will Shively)

Below is an excerpt from Olufadeji’s essay:

The other day, a couple tears rolled down my cheek. Scratch that. The other day, I cried. It has been hard for me to come to terms with the fact that the current situation in Nigeria has been so devastating as to push me to tears, but this is the way things are . . . for now.

The unrest that has continued in Nigeria over the past two years culminated in the kidnapping of more than 300 teenage schoolgirls in Chibok on April 15, and in the early May bombings close to the capital city of Abuja. These attacks have been linked to Boko Haram, an Islamist terrorist group that was founded in the early 2000s with the intention of imposing Sharia law. The group’s name, Boko Haram, is colloquially interpreted as ‘Western education is forbidden,’ but it has a broader definition. Haram is Arabic for something sinful, or forbidden by Islam. Boko is a Hausa word that refers to an idea or object that involves fraud or deception. For example, during the British rule, Boko was used to refer to the values and ideas imposed by the expatriates. So Boko Haram could be translated to mean ‘western ideas are forbidden by Islam,’ which might include the idea of a democratic government or that of educating girls.

I am by no means a political analyst but I feel the need to help people realize that the problem of Boko Haram is not just that of a religious clash, but it is very much political. It stems from what people believe to be the British forcing the country boundaries of Nigeria and merging a very diverse group of people. …

Effecting positive change in Nigeria has always been my goal. Medicine happens to be my means. When I saw the post-bombing pictures of dead bodies being heaped unto pick-up trucks by officials who seemed to be protected only by examination gloves, I cringed. I cringed the same way I do when I read reports about the mortality rate diseases like malaria and polio still claim in my country. Our health sector has made some advances in the past decade but there is always room for improvement . . . and it’s a room that can fit a blue whale, especially for a country with the largest GDP in Africa.