How Not to Get Eaten by Polar Bears

Canadian bear expert Andy McMullen says that if you want to learn about bear behavior, listen to the old folks who used to hunt them with a spear.

“Inuit elders say the simple sight of the bear is not a call for panic, but it is easy to panic if you are not armed with knowledge,” says McMullen, a veteran of 35 years in the Canadian far north. “If you don’t know how to avoid them or what to do or how to interpret their behavior, you’re stuck.” 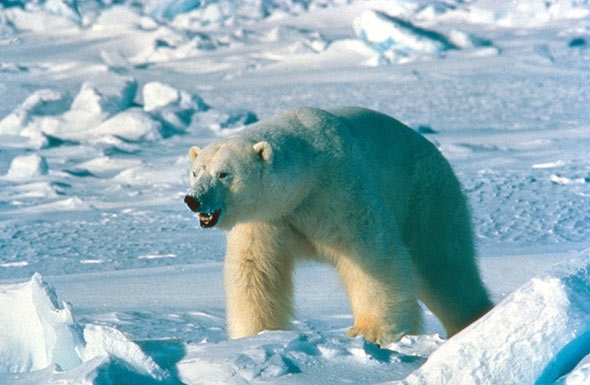 This bear displays a defensive posture that is a cue to back away slowly, which experts say may lessen any perceived threat to the animal. (Photo courtesy of the United States Fish and Wildlife Service)

McMullen’s mantra is at the core of the lessons he teaches in sessions such as his April 18 presentation to a group of Dartmouth scientists doing research in polar bear country. This was part of a two-day training workshop sponsored by the National Science Foundation.

“The second day was polar bear safety—basically how to repel an attack and not get eaten, which can be handy, since polar bears are moving farther south as the global climate warms,” says Lee McDavid, IGERT (Integrative Graduate Education and Research Traineeship) program manager at the Institute of Arctic Studies in the John Sloan Dickey Center for International Understanding.

Erich Osterberg, an assistant professor in Dartmouth’s Department of Earth Sciences, says global climate change is affecting the way research is conducted. “Not all of changing field conditions that scientists face make their job easier. In Greenland, some Dartmouth scientists now carry rifles and hire guards for polar bear protection in areas where the bears were rare until a few years ago.”

Enter bear expert McMullen, a man with high regard and respect for the great white Ursus maritimus. “They are gymnastic bears,” he says of their ability to leap among the ice floes. “They are very powerful swimmers. They are highly intelligent animals, and their sense of smell is legendary.” 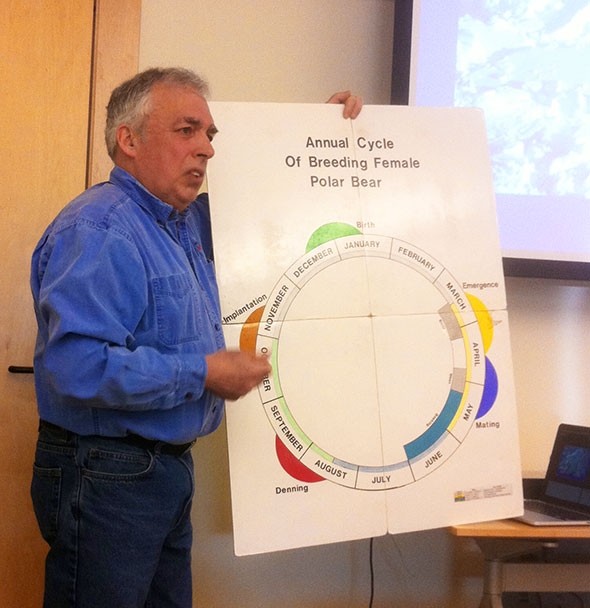 The polar bear is almost exclusively carnivorous, and the ice, their preferred habitat, is their hunting platform. When the pack ice melts and they come ashore, this is the most dangerous time in the north—with the highest risk of an encounter.

McMullen says polar bears tend to approach cautiously. “If you remain quiet and don’t do anything, the bear will come closer to try to figure out what you are. The idea is to let it know you are human as soon as you can. All you have to do is talk,” says McMullen. “The human voice is probably the best deterrent there is, and I take mine with me everywhere I go,” he quips.

They are looking for seals, the mainstay of their diet, not humans. Encounters may be based on curiosity, signaled by the animal sniffing the air, stopping, and starting, and possibly standing on its hind legs. McMullen says to back away slowly and do not run.

A bear may display defensive behavior—huff and puff, growl, stomp its feet, and appear agitated. Don’t make eye contact and back away slowly, the bear expert advises, and don’t shout or make sudden moves.

If the bear is aggressive, showing signs of stalking or hunting you, now is the time to make loud noises and reach for the shotgun.

“But the most important thing of all before encountering a bear is to be observant,” McMullen says. “See the bear before it sees you. The animal is probably as interested in avoiding an encounter as you are.”