Kudos recognizes Dartmouth faculty, staff, and students who have received awards or other honors.

Presidents and Assemblies: Constitutional Design and Electoral Dynamics (1992), a book co-authored by Professor of Government John Carey, has been recognized with the American Political Science Association’s George H. Hallett Award. As noted on association’s website, the award is presented annually to “the author of a book published at least 10 years ago that has made a lasting contribution to the literature on representation and electoral systems.” 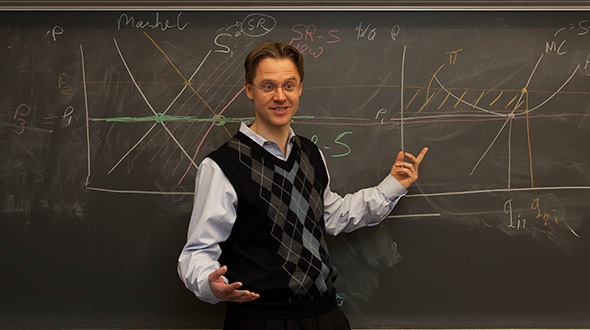 Associate Professor of Economics Erzo Luttmer received an award from the European Economic Association for an article he co-authored. (Photo by Joseph Mehling ’69)

The European Economic Association has awarded the 2014 Hicks-Tinbergen Award to Associate Professor of Economics Erzo Luttmer and co-authors Amy Finkelstein and Matthew Notowidigdo for their article “What Good Is Wealth Without Health? The Effect of Health on the Marginal Utility of Consumption,” published in the Journal of the European Economic Association (JEEA) in January 2013. The award is given once every two years to the authors of an “outstanding article” published in JEEA during the two preceding years.

The website NerdScholar named Dartmouth’s game design program the “Best Program for Social Change.” The website notes that “faculty, including noted professor Mary Flanagan, and students strive to create socially conscious video games that aim to educate consumers as well as provide entertainment.” Home to the game design lab Tiltfactor, “The organization stands out in the gaming world because its mission aligns with—and is a large influencer of—the game design program’s humanitarian efforts,” writes NerdScholar. Flanagan, the Sherman Fairchild Distinguished Professor in Digital Humanities and director of Tiltfactor, was recently chosen to enter The Brown Foundation Fellows Program at the Dora Maar House in Ménerbes, France. The international program, administered by The Museum of Fine Arts, Houston, is for artists and other professionals in the arts and humanities to further their work.

Autumn Dawn White Eyes ’14 won the grand prize in the young adult category of the Lakota Children’s Enrichment’s Voices of the Land Writing Challenge. She won the award for her spoken word submission titled “Mitakuye Oyasin,” Lakota for “We Are All Related” or “All My Relations.” “Autumn’s spoken word entry was the unanimous winner in the Young Adult category,” said the organization’s president, Maggie Dunne. “Her thoughtful and moving piece demonstrates that Autumn is both a poet and an activist, and we look forward to working with her in the future.”

James Brofos ’15, Ajay Kannan ’15, and Rui Shu ’15 received an honorable mention for the data analysis project they presented at Duke DataFest 2014. The team was sponsored by the Neukom Institute for Computational Science.

The documentary Passion for Snow, which traces more than 100 years of skiing history, including the storied tradition of skiing at Dartmouth, has been nominated for a Boston/New England Emmy award. The winner of the award will be announced on June 7. Steve Waterhouse ’65, Tuck ’67, is the film’s executive producer.