When engineering professors John Collier ’72, Thayer ’77, Robert Graves, Joseph Helble (dean of Thayer School of Engineering), and Charles Hutchinson were presented with the nation’s top prize for engineering education, the May 2 ceremony broke new ground. The occasion was the first time the National Academy of Engineering (NAE) awarded its Bernard M. Gordon Prize for Innovation in Engineering and Technology Education at the institution being honored rather than in Washington, D.C. 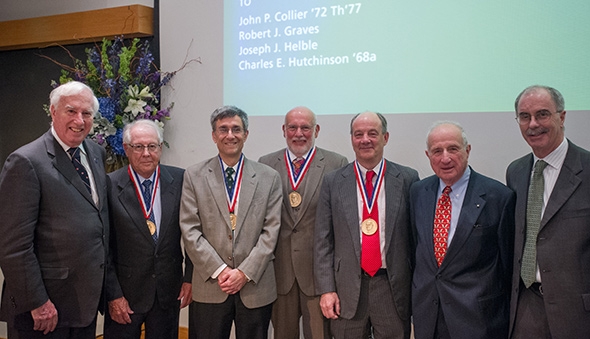 Presenting medallions and certificates to the honorees at a public ceremony at Thayer School of Engineering, Dan Mote, president of the NAE, called the Gordon Prize “the largest engineering education award in the world, not just the United States.” Bernard M. Gordon, his wife, Sophia, and Gordon Prize committee member Nicholas Donofrio were among the NAE delegation.

As part of the ceremony, a panel discussion showcased educational innovation throughout the engineering curriculum. The panel was moderated by Helble and featured four Thayer professors (John Collier, Vicki May, Solomon Diamond ’97, Thayer ’98, and Tillman Gerngross) who described the creative approaches they bring to their engineering classes.

“In ENGS 21, we encourage the students to choose open-ended projects that would interest them and some clients—some users—and then attack it,” said Collier, the Myron Tribus Professor of Engineering Innovation. “But you guide them the whole way. It’s a very labor-intensive business. I don’t do it single-handedly. I typically have a class of 60 to 80 and 15 to 18 TAs, one per group, to guide them. We have four instructors in the shop who are trained to take care of these students and guide them, and we have electrical and computer folks. There’s a network of folks that make a net under the students to help and guide them.”