This story was originally published in the Dartmouth College Fund’s spring 2014 issue of From the GREEN. 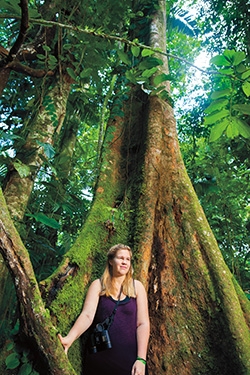 You might not think of Dartmouth as a hub for marine biology. But when Emily Goodwin ’14, a Cherokee and Choctaw student from Tulsa, Okla., discovered an unlikely passion for ocean life, she also discovered that at Dartmouth, she could follow that passion as far as she could go—even face-to-face with Carcharodon carcharias, the great white shark.

From the GREEN spoke with Goodwin about her Dartmouth experience:

Why did you choose Dartmouth?

I saw Dartmouth for the first time on the Native American Fly-In Program. I wasn’t planning to go to school out of state, but I fell in love with it. I was the first person from my school to go to college out of state, much less to an Ivy.

Oklahoma and Hanover are both, well, landlocked. Why marine biology?

I had never seen the ocean before, but freshman year I visited one of my floormates in Sarasota, Fla. We went to the beach the first night, and it was immediate—I absolutely fell in love with it, much like when I first saw Dartmouth. That summer I was an education intern at Mote Marine Laboratory. I taught marine-based summer camps and learned to scuba dive. I’m a divemaster now.

How did that experience shape your choice of major?

Originally I thought I would study women’s and gender studies or studio art, but after that summer in Florida, I switched to a double major in biology and environmental studies. We’re not a marine biology school, so I had to work with a lot of professors to design both majors to be most applicable. I’ve worked in Professor Becky Irwin’s lab—a great research experience. Douglas Bolger, in environmental studies, works in conservation biology, and he’s helped me design my thesis about great white shark ecotourism and conservation. Professor Celia Chen ’78 teaches the only marine bio class at Dartmouth. This term I’m on the biology FSP in Costa Rica and Little Cayman, and Professor Chen is teaching about coral reef ecology. I love that Dartmouth’s ecology courses are so hands-on—the department emphasizes lab and field work, and student research.

Mote Marine Lab’s founder, Eugenie Clark, was the first woman shark scientist, and they still do a lot of shark research. I got interested in how little we actually know about most shark species—how do you study a species that lives its entire life in the water? Technology is starting to change what we can learn.

Junior fall I got an undergraduate research grant to go to South Africa and study the effects of cage diving ecotourism on great white shark behavior. Cage diving is touted as a great educational tool for conservation, but we wanted to see if it actually negatively impacts the sharks. We’re still analyzing almost three years’ worth of data.

What’s it like to go cage diving with great white sharks?

It’s the most majestic thing you could possibly see. My favorite shark was a female we nicknamed Cat. You expect sharks to aggressively grab the bait or run into the cage, but Cat would roll on her back and rub against the side of the boat, and put her head above the water to look around. It was cool to see an animal that you’re taught to be scared of—and they are very scary—do that.

Why should people care about sharks?

There’s a lack of conservation ethic around sharks, because they aren’t charismatic like dolphins or sea turtles, and they have a bad reputation. But from an ecological standpoint, many shark species are apex predators, so removing them has a huge effect on everything in their ecosystem, including commercially valuable fish species. Some of the biggest threats to sharks are direct overfishing tied to the shark fin soup trade, and also by-catch—in big tuna fisheries they catch tons of sharks all the time. But why conserve any species? Sharks are so impressive. They’re so beautiful to watch, so calm underwater, and just perfectly adapted, perfectly in tune. That’s why I want to protect them.