Nick O’Leary ’14 is all about theater, but not to the exclusion of everything else. Happily, he says, Dartmouth, offered him the opportunity to study theater in in the context of the liberal arts. 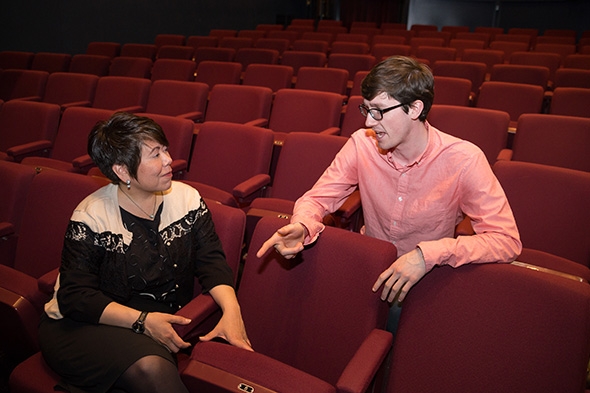 With established theater credentials, Nick O’Leary ’14 looks to Professor Irma Mayorga for guidance in developing, researching, and executing his independent stage project based on “The Alchemist,” a 1610 play by Ben Jonson. (Photo by Eli Burakian ’00)

“It was important for me to be able to contextualize my theater work with broader liberal arts study, and the professors and classes available at Dartmouth are hard to beat,” a perspective developed living in Hanover since the fifth grade. “But as much as there is to be learned from rigorous coursework and brilliant faculty at an institution like Dartmouth, there’s no substitute for the hands-on experience that undergrads can get from actually developing, researching, and executing an independent project from the ground up,” he says.

O’Leary was immersed in the theater long before he began his studies at Dartmouth. He describes himself as a theater director and designer, on a track that began at a very young age, and one that has led him to explore all theatrical disciplines, especially performance, history, and theory. The chance to direct fully produced shows with close mentorship from faculty was a major factor in his decision to come to Dartmouth.

His honors thesis project was a fully produced presentation of The Alchemist, written by Shakespeare contemporary Ben Jonson. O’Leary served as the director, scenic designer, and background researcher. “First written and performed in 1610, the project involved research on the original performance context and the history of how the play has been staged over the last 400 years to find ways to adapt the play for a contemporary audience,” O’Leary explains.

“Research is the way we break new ground in the humanities, arts, and sciences. We usually think about research in science and technology fields, but there is also innovation that needs to happen in the arts. We’re constantly reaching for new audiences, new forms, and new aesthetics,” he says.

O’Leary heaps accolades on his adviser, Irma Mayorga, assistant professor of theater. “Her practice involves a mix of scholarship, directing, and design work, so she was the perfect person to advise me on an interdisciplinary project like this one. Working with her often felt like I was bouncing ideas around with a collaborator and less like I was being overseen by an authority figure.”

“Nick understands that theater is not merely entertainment or diversion, but rather part of a vital means of human communication, indeed, of transmitting knowledge,” Mayorga says. “His research engaged a rigorous conversation with theater history and the play’s archive to shape his production. Delving into the realms performance, theory, and aesthetics informed every aspect of his work as a director/designer and grounded his choice to make bold leaps into new aesthetic territories, enabling Jonson’s 400-year-old play to come alive for a contemporary audience.”

After graduation, the burgeoning director plans a move to New York or another United States theater hub to pursue a career as a freelance theater director.