Not Just a Pretty Face, But It Helps on Election Day

Female politicians’ success can be predicted by their facial features, especially in conservative states where women with more feminine faces tend to do better at the ballot box, a Dartmouth-led study finds. 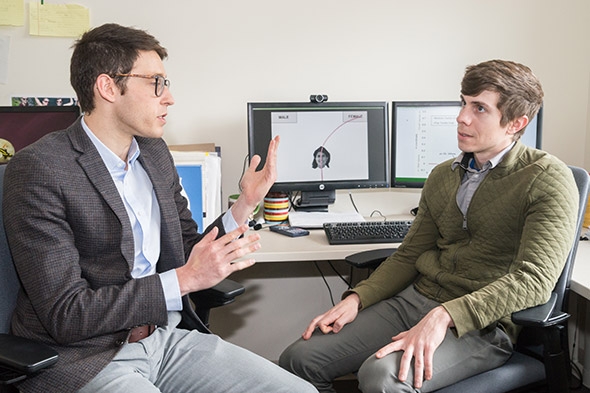 Professor Jon Freeman, left, discusses the ramifications of the MouseTracker study with Postdoctoral Researcher Eric Hehman, lead author on the report. A depiction of the software in action is seen on the monitor in the center of the photo. (Photo by Eli Burakian ’00)

The results suggest women’s electoral success requires a delicate balance between voters’ perception of traditional femininity and political competence. The study appeared in the journal Social Psychological and Personality Science and included researchers from UCLA and the University of Delaware.

The researchers used software called MouseTracker that was developed by the study’s senior author Jon Freeman, an assistant professor and director of the Social Cognitive and Neural Sciences Lab at Dartmouth. MouseTracker measures computer mouse movements during psychological experiments, revealing how participants’ real-time hand movements may be partially pulled toward various alternatives and how their psychological response evolves over time. 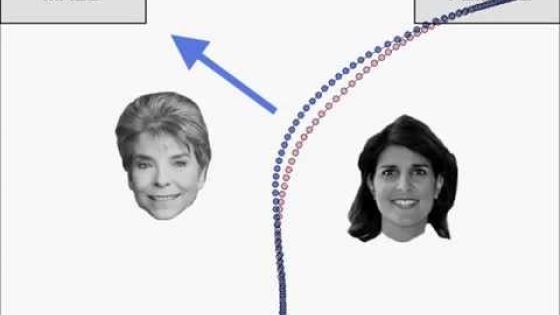 More than 1,000 scientists around the world are using the software for many purposes, such as detecting cognitive impairments and subtle racial biases, assessing marketing decisions and financial behavior and predicting health outcomes and social inequities.

Previous research has shown that faces with subtle atypical gender cues–women with masculine features and men with feminine features–cause initial uncertainty when people try to categorize them as male or female. Earlier studies also have linked perceptions of competence in male politicians’ faces to political success. But the new study demonstrates for the first time that gendered cues uniquely predict female politicians’ electoral success above and beyond competence, suggesting a discrepancy between traits used to evaluate male and female politicians.

“Individuals are highly sensitive to gendered facial cues, and these cues are processed within only milliseconds after seeing another’s face,” Freeman says. “It’s important to examine how facial cues could inadvertently affect female politicians’ electoral success, especially given the possibility of a female U.S. president in the near future and the rising number of women in Congress.”

The Dartmouth researchers wondered whether initial confusion over how people perceive the biological and social gendered cues in politicians’ faces–such as shape of eyes, cheekbones, jawlines and brows, length of hair, makeup–may influence conservative and liberal voting behavior and election outcomes.

“We show that subtle uncertainty during the initial processing of a face’s gender predicts the electoral success or failure of female politicians, and this is a unique effect not explained by perceived competence or attractiveness,” says Freeman. “A female politician’s success was related to how feminine or masculine her face was perceived less than one half-second after its initial exposure, suggesting that the way a face’s gender is rapidly processed may translate into real-world political outcomes.”

The effects became more pronounced as the conservatism of the constituency increased, which supports previous research indicating that conservatives may be less tolerant of uncertainty. “This is thought to reflect a relatively rigid cognitive style and an emphasis on traditional gender roles,” says lead author Eric Hehman, a postdoctoral researcher in Freeman’s lab. “In contrast, previous research suggests liberals tend to exhibit greater tolerance of ambiguity and cognitive flexibility.”

To quantify each state’s conservative to liberal distribution, researchers looked at the margins of victory in each state from the five presidential elections between 1992 and 2008. Differences between conservatives and liberals’ tolerance for uncertainty and traditional gender roles may create a volatile situation for female politicians.

“Because masculinity is stereotypically associated with leadership in the U.S., conservatives’ preference for traditional gender roles and low tolerance for uncertainty may require women’s leadership aspirations to be tempered by strong associations with femininity, particularly in their appearance,” Hehman says.

Stories about the Dartmouth study have appeared in a number of media outlets, including The Washington Post, U.S. News & World Report, TIME, andNew York Magazine.